I subscribe to Jeff Fountain’s ‘weekly word’, director of the Schuman Centre for European Studies, affiliated with the University of the Nations. Originally from New Zealand, he lives in the Netherlands and writes passionately about Europe. The views expressed are of course his, but they flag up the challenge of these days. Here are a few excerpts from the letter:

However, nationalist anti-Europeanists have now changed their tactics to ‘Europeanise’ their anti-Europe strategies. When the much-heralded Brexit-domino effect did not materialise, in which other nations would have followed the British to the exit, the anti-Europeanists went quiet on leaving the EU and the Euro and are now calling for a “Europe of the Nations”.

This ‘Europeanised’ anti-European strategy was apparent last weekend when Matteo Salvini, the Italian Interior Minister, leader of the far-right Lega, declared in Milan that the ‘European elite’ had betrayed the founding fathers. On stage with Holland’s Geert Wilders and France’s Marina le Pen, he then called for a ‘Europe of the Nations’, meaning a Europe of sovereign nations, as if he and his allies were restoring the founding fathers’ vision!! This was anything but what the founding fathers – Schuman, Adenauer, de Gasperi and Monnet – had in mind. Such a vision is a recipe in the long-run for ongoing conflicts as it means a return to the prewar status quo of competing nation-states.

The effect could be paralysing. Just when Europe needs to step up to more global leadership, its capacity to defend EU citizens from external threats would be put at risk. Europeans already have enough external worries with Donald Trump deconstructing the international order, Vladimir Putin trying to undermine European political systems through a large-scale misinformation campaign and the Chinese muscling in on the telecommunications market with potential spy-network capacities.

There is certainly a case to be made that the founding fathers’ vision of ‘a community of peoples deeply rooted in Christian values’ has not been faithfully followed, as I wrote in Deeply Rooted. That was a project which prioritised seeking the common good of the whole, not each nation seeking its own self-interest. It was to be a process that was gradual, transparent and democratic.

What is beguiling for many Christians is that politicians like Salvini, Orban and Wilders talk of restoring judeo-christian foundations, but they mean old political and cultural identities. They do not mean the values of inclusion, forgiveness and reconciliation, of caring for the stranger, the poor and the vulnerable, of dignity and rights for each person. 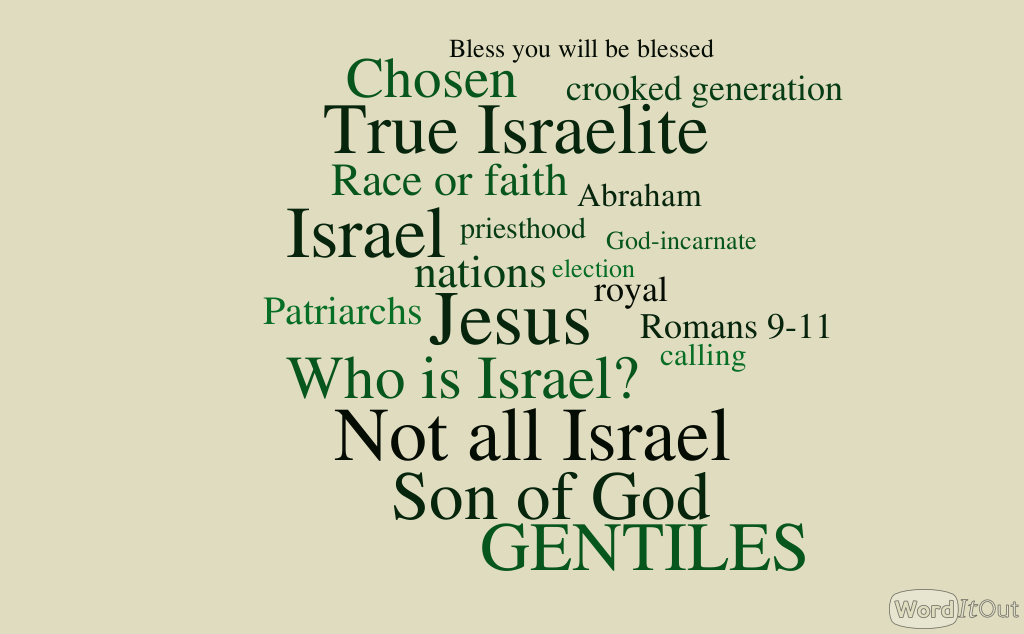 Quickly bless Israel or we will be cursed. Thank God the embassy has been moved (sigh of relief) now God can bless. The question of Israel, the chosen people, is a thorny issue and one that is sure to divide. The two polarised positions of the church as a kind of stop-gap and the future being that for Israel with Jesus reigning literally from Jerusalem, and that of Israel as chosen being over has divided Christians for ever. Terminology such as ‘replacement theology’ has been branded against the latter and the former is termed ‘Zionist’.

So up front: I am closer to the latter position than the former and do not consider simple support for the nation of Israel is warranted by Scripture. I do, however, acknowledge that there is a very real issue of Israel being marginalised with certain nations / ideologies committed to see it removed from the earth.

There has always been a critique of Israel within Scripture

The prophets – as they always should – challenged the ‘Israel exceptionalism’ that was prevalent. (This is why the prophetic voice is not going to sound patriotic in any situation!) Their challenge to Israel can be reduced to two main points:

Always within Israel’s history there was the challenge of ‘who is Israel?’. Only the most liberal were able to accept race as being the defining issue. Ask a Maccabean, a Pharisee, or an Essene and they would quickly shout another criterion – faithfulness to the God who called Israel. They denied that race gave a person ‘salvation’. The New Testament seems to follow along. Consider the very harsh words of Jesus:

“I know that you are Abraham’s descendants. Yet you are looking for a way to kill me, because you have no room for my word. I am telling you what I have seen in the Father’s presence, and you are doing what you have heard from your father.”
“Abraham is our father,” they answered.
“If you were Abraham’s children,” said Jesus, “then you would do what Abraham did. As it is, you are looking for a way to kill me, a man who has told you the truth that I heard from God. Abraham did not do such things. You are doing the works of your own father.”
“We are not illegitimate children,” they protested. “The only Father we have is God himself.”
Jesus said to them, “If God were your Father, you would love me, for I have come here from God. I have not come on my own; God sent me. Why is my language not clear to you? Because you are unable to hear what I say. You belong to your father, the devil, and you want to carry out your father’s desires. He was a murderer from the beginning, not holding to the truth, for there is no truth in him. When he lies, he speaks his native language, for he is a liar and the father of lies. Yet because I tell the truth, you do not believe me! Can any of you prove me guilty of sin? If I am telling the truth, why don’t you believe me? Whoever belongs to God hears what God says. The reason you do not hear is that you do not belong to God.” (John 8:37-47.)

Strong words in the extreme. It is hard not to read the above words as declaring that all Pharisees who opposed Jesus are not Abraham’s children but the children of the devil. No-one could get away with making those statements, but they are recorded as being from the mouth of Jesus.

Paul is maybe a little less polemic (other than when writing autobiographically saying that his pure racial inheritance was ‘dung / crap’) but picks up the typical intra-Jewish debate of who really can lay claim to being of Israel:

Nor because they are his descendants are they all Abraham’s children (Rom. 9:7).

It was not considered enough to be physically descended from Abraham to be included as part of the ‘Israel of God’. Faithful Israel was less than physical Israel, and Israel suffered many times the judgement of God by foreign imperial captivity because of the unfaithful in the land. This is what drove the pre-Christian Saul / Paul to persecute (Jewish) believers in Jesus as the Messiah. He was totally justified in doing so as one faithful to the covenant. (Later he saw such behaviour as an indication that he was the ‘chief of sinners’.)

Jesus, born of a woman (human), born under the law (Jewish) laid claim to Israel’s calling as ‘son of God’. Out of Egypt he came (Matt. 2:15 / Hosea 11:1). It is little wonder therefore that post crucifixion (the Roman penalty for rebellion, and would in 66-70AD become the very visible penalty for Israel’s rebellion) the apostolic appeal was to all who were descended from Abraham to save themselves from this corrupt generation (Acts 2:40 quoting Deut. 32:5 – ‘They are corrupt and not his children; to their shame they are a warped and crooked generation’) through baptism into Jesus.

It is not sufficient to say Jesus replaced Israel, but an understanding that his death was the death of Israel, for their sake, and his resurrection was the resurrection of Israel on the third day (Hosea 6:2). He dies in Israel’s place, the mother hen willing to sacrifice its life when the fire comes so that the chicks could survive. There were those of Israel who survived – witness the 3000 on the day of Pentecost mirroring, and contrasting, the 3000 who died on the day when the Levites exercised judgement on all those who were unfaithful (Exodus 32:28).

Jesus, ultimately is the one true Israelite, the one true human. The future centres in on his work for Israel, for the world. The future does not centre in on Abraham and his physical descendants, thought without them there is no God incarnate as a faithful Jew.

The complexity of it comes out in Paul’s anguish in Rom. 9-11.

As far as the gospel is concerned, they are enemies for your sake; but as far as election is concerned, they are loved on account of the patriarchs, for God’s gifts and his call are irrevocable. Just as you who were at one time disobedient to God have now received mercy as a result of their disobedience, so they too have now become disobedient in order that they too may now receive mercy as a result of God’s mercy to you. For God has bound everyone over to disobedience so that he may have mercy on them all. (Romans 11:28-32.)

They are loved because of the patriarchs. Race counts for something, yet they (those who have not responded to Jesus) are now enemies and disobedient, but the result is salvation to the Gentiles. Indeed, Paul suggests we are all in the same boat: disobedient whether Gentile of Jew (all have sinned, both Gentile and Jew) with the result that all can now receive the mercy of God ( NB he states NOW, not at some future date).

Bless Israel? Well if that means no criticism of policies that does not seem to line up with Scripture. And to suggest that modern Israel as a secular state means that all those who are Jews within it by race are chosen – there seems a big weight of Scripture opposed to that, and if we were to draw a straight line from OT theocratic Israel to secular Israel today we would have to do with the critical lenses of ‘Provider and Protector’.

Disregard Israel? There still seems to be that ‘loved because of the Patriarchs’ element hanging there.

But there remains the chosen nature of humanity that only Jesus fulfilled. As servant to the nations, as suffering servant on behalf of one and all. Yes he took that on as on behalf of Israel, but that was only ever for the sake of the world. Israel was never chosen to condemn the world, but to enable the world to truly live and move within the Presence of God. Whatever we make of Israel’s current status I think is academic if we as the body of Christ fail to live up to our calling – to bless the world. To live knowing that a new creation is our habitat, one free of fear of the other, and one filled with faith for the future, the future that the one true Israelite, the one true human, the God-incarnate one came to release. That was the calling of Israel and is the calling of the body of Christ. Quite something to live out and something the nations are still calling for.