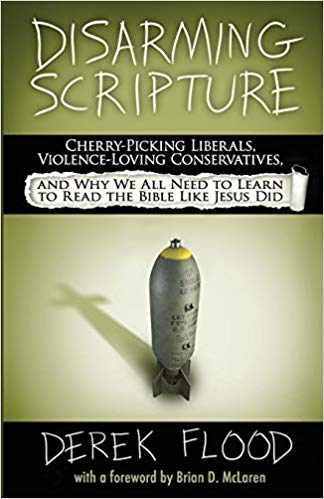 How do we read Scripture? Many decades ago I came across an early lecture by NT Wright where he suggested that the authority of Scripture lay in its narrative. This probably should not surprise us, after all so much of Scripture is narrative. It is certainly not laid out as a systematic theology. Even the books of the law are mainly narratival, and where we have laws they are in the context of being given to a people on a journey.

An aside: the image is of Derek Flood’s book ‘Disarming Scripture’. I am not covering the material he covers here and it is more than worth a read. He says we can have an approach that is a blind obedience to what we read or a faithful questioning. He suggests that the Bible itself demands the latter, and in approaching the violent texts of Scripture shows how both Paul and Jesus selectively quote passages and ‘delete’ parts. I suggest this is not a cop out and challenges us to read, ‘be read’ and place Jesus at the centre of all things.

The narrative takes us from Creation to New Creation. It travels through a series of ‘falls’, the calling of Israel, the failure of Israel, the beginnings of a faithful remnant as marked by the baptism of John, centring in on the baptism of the only true human / remnant of Israel (Jesus). It is inevitable that once he is baptised John must decrease, the one who was the ‘greatest born of women’ prior to that watershed, for from then on the least in the kingdom of heaven would be greater than John. The watershed is marked and huge. The NT, and indeed Jesus himself does not give us the option of being faithful to the narrative of Scripture by equalising all things. With Jesus there is a seismic shift. This is why he has to be the lens that Scripture is read through and critiqued, and in that sense parts of it ‘rejected’.

From Incarnation through resurrection and outpoured Spirit the narrative follows those who have responded to the ‘Gospel’ and are collectively known as the body of Christ: those caught in the in-between, already having received the firstfruits of the Spirit but not yet living totally out that fullness, nor living in the fullness of what is yet to come. A new humanity on a journey, a narrative pushing for a fitting end, with a new heaven and new earth (a merism for all of creation being renewed).

Now when I read Scripture I kind of have that overview. Texts that come from an earlier part of the story are from that part of the story. They might not be relevant as is for me today. How to treat slaves might not be what I need, but there might be principles there that apply in the ‘chapter’ of the story that I am living in. Not harvesting to the full extent of the field might or might not be a good principal in an agricultural society, but surely the ‘deliberately not maximising profits’ and making sure that we make it easy for those who need to get something of ours even though they have not worked for it, could well make those earlier instructions to continue have relevance in our current chapter.

I am not so interested in was there an historical Adam (I don’t think so), or where was the Garden of Eden. I could even on a certain day be convinced that the devil does not exist (in the sense of a personal devil) – though whether he does or not I am committed to cast out demons and seek to confront demonic powers where I see them! It is quite easy being an agnostic on such things when there is a conviction that God is the author and he will be the finisher of the story that we are living within. On some issues I am not ‘orthodox’. In spite of living for two years in the Tarshish where Jonah was headed for, I think it is a made up story. But one with such a point. And a narrative worth referring to as if were ‘true’, for the (point of the) story is so true. Nineveh never took three days to cross, but always our Ninevehs take 3 days to cross (https://3generations.eu/posts/2018/04/the-third-day/)

I could go on with other examples. And with great joy I realise I could be quite wrong on some of my readings. What seems more important to me is that there should be growing evidence that Jesus, the God-human, is reflected in who I am, what I say, and how I act. To continue that journey I will need to go back to Scripture, read and re-read the various parts of the narrative, regardless of what ‘chapter’ they are of the story. I will have to let those texts ‘read’ me, while I keep an eye on where God is taking it all. To a New Jerusalem that can only come from another dimension, but can only be assembled from the acts of kindness and love carried out in this dimension.