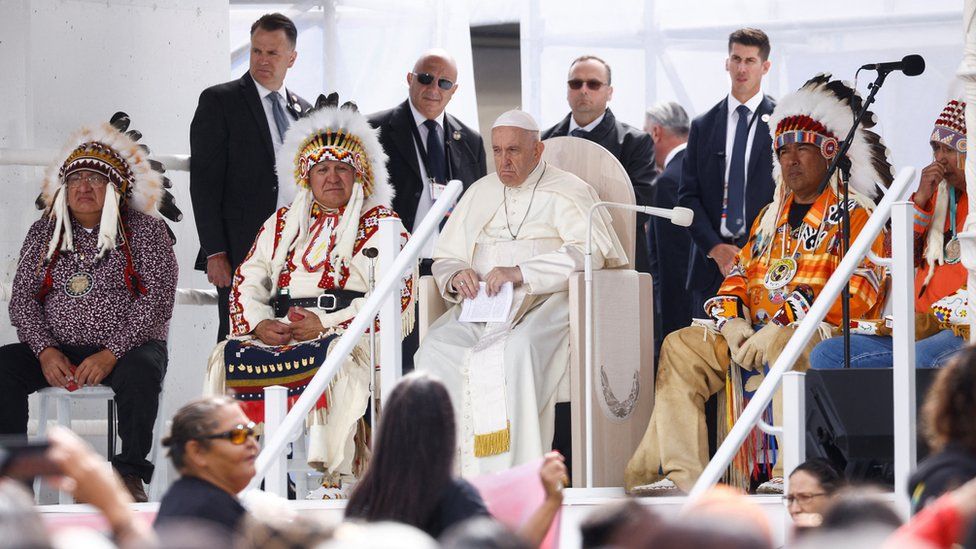 The pope has travelled to Canada and to lift a few sentences from https://www.bbc.com/news/world-us-canada-62296834

In his first public remarks in Canada, Pope Francis has asked indigenous residential school survivors for forgiveness.
“I am deeply sorry,” the Pope said on the grounds of a former residential school in Maskwacis, near Edmonton.
He said his apology is a first step, and that a “serious investigation” into abuses must occur to foster healing.
The pontiff is in Canada to apologise for the Church’s role in schools meant to assimilate indigenous children.

And that is what apology from the heart does, and when it comes from someone / a group who are in relationship to the original perpetrators it is so powerful. This, I know, is not the first work done on apologies into the first nations people of Canada (who of course do not recognise the artificial border).

Plenty of Old Testament passages that can be pulled up – forgive us our sins and the sins of our forefathers / mothers. And all of it seems to undergird the work of Jesus, from his baptism that launched a movement. John was very reluctant to baptise ‘the Lamb of God who takes away the sin of the world’ in a baptism for the ‘forgiveness of sins’. Understandably so! But once Jesus said it was to fulfil all righteousness, into the water John plunged Jesus. Jesus, confessed sin – for that was the baptism of John – not his own sin, but the sin of the nation. Going all the way back to the wanderings in the wilderness, for therein lies the background to the 40 days in the wilderness and his meditations on those passages of Scripture. A door was opened, not all came through it, for to do so they had to separate themselves from this perverse generation.

First nations peoples. We need this start that the pope has taken on in and through his apology. The land is crying out for it. Talk to anyone in our neighbourhood who is over 60 years old and they will verbalise (in non-scientific language) the earth / climate has changed beyond all recognition. Sit as we do in 39°C (98°F) heat without air-conditioning and we do not need much to persuade us of the changes! Ask first nations people and they without scientific language will tell us.

I wonder what might happen if the start gets momentum. In Canada a nation of mercy, then beyond?