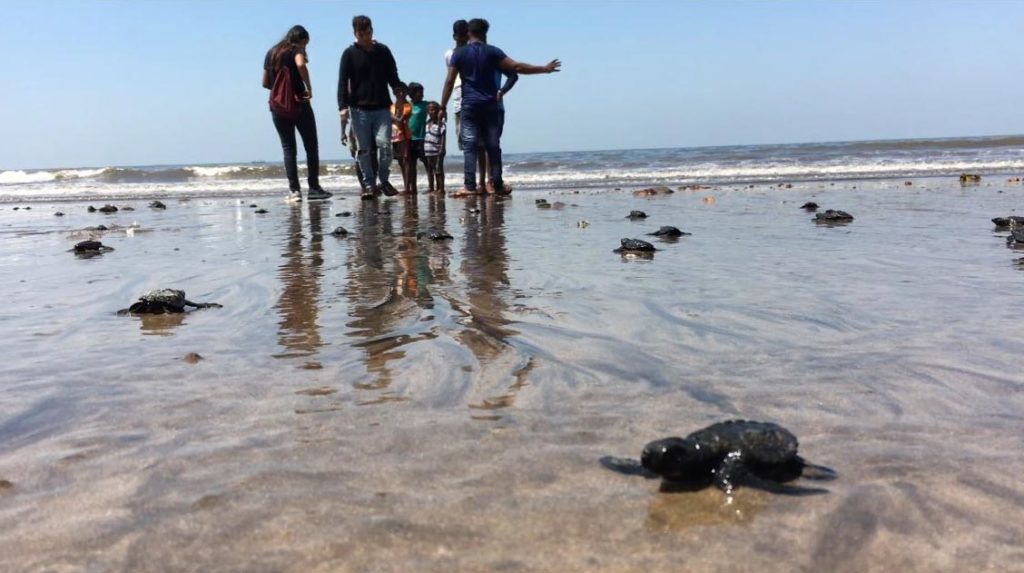 Glad I call this site ‘Perspectives’ as it gives me an opportunity to write from time to time some musings that enter my head. Today’s musing began when Gayle read me concerning a lawyer who used to play on his home beach in Mumbai as a child but when he returned as an older adult it was covered in trash. He began with one other person to try and clean it up and eventually engaged the wider community. It took over a year till they began to see the beach restored. When the beach had been in good condition all those years ago turtles had come and laid their eggs on it, but none had been seen in the previous 20 years. After cleaning it up the turtles returned. Although there is ‘no more sea’ in the new heavens and earth this surely is a theological statement concerning the imagery of the sea as the source of chaos and not a material statement about its non-existence. If what we do now is providing the building material for the age to come (our good works) maybe what this community is doing is making some sort of provision for that age. (Perspectives / musings!!)

The story did get me thinking about something that many religions have in common. They seem to elevate ‘spirit / spiritual existence’ above physical existence in a way that denigrates humanity. Thus embracing the ‘soma sema’ of Greek philosophy (the body is a tomb, the real me is inside this tomb… real life is non-physical, death is an escape, etc.). Or they embrace the exercise of power over as being the mark of righteousness. We see this with Paul as a ‘righteous’ Jew. Persecuting those who were renegade to the faith, viewing them as enemies and deserving of the expression of his zeal. The Crusades and some aspects of current terrorism are religiously motivated with the desire to impose what is ‘right’, and what is right takes precedence over the lives of others. In the realm of legislation we see this in a desire to express ‘sharia law’ over a society, and also the Christian variety of that where we wish legislation that imposes Christian values.

I, as do most believers, oppose abortion except for some very few cases. As far as I am aware this was also the personal position of Obama in the USA although his position on legislation was that it was a personal choice. Abortion is one of those very difficult areas for believers who are in public office. Personal beliefs and public legislation cannot always line up. The arguments are very far reaching, but the fact that the abortion rate was lower at the end of Obama’s time than before the famous Roe v. Wade ruling indicates the complexities involved.

Faith has a huge impact on the public life of a society and rightly so, but a religion, any religion that seeks to impose on the wider society often draws on the concept that righteousness is aligned to power over. Add to that the elevation of life that is a removal from society (spirit is superior) and maybe we can suggest that (most) religions have those two elements in common. The two elements result in a withdrawal from the wider society and an engagement that is an imposition of a change from above.

The Jesus way I think is different. Righteousness cannot be about expressing zeal against people. Paul concluded that what he formerly considered was an expression of righteousness he now saw as excrement and that he was indeed the chief of sinners. Righteousness has to be centred on enemy love. Zeal has to be a zealousness for the ways and character of God to infiltrate society: love permeating all relationships and actions. A spirituality that is life-affirming, that sees the (eternal) good in the actions of all around us.

Does such an approach compromise the message of the Gospel? Yes, if the Gospel is about power and the denigration of human existence. But if the Gospel calls all those who have heard the voice of Jesus to follow him and lay down their lives for others, and then ‘go’ with a focus on discipling all peoples there is no compromise, particularly when on that journey there is no elevation of self over others.

I end my musing with the question as to what contribution religion, in all its forms, has made to the world as we have it today when shaped by the twins of spirit above matter and power over others for righteousness’ sake. And what might happen if there was a genuine Jesus revolution by a new apostolic wave that was willing to work for the future with patience, knowing that the multiplicity of the small and the richness of diversity could yield a future so different to the one that will be ours if we continue on this current pathway.