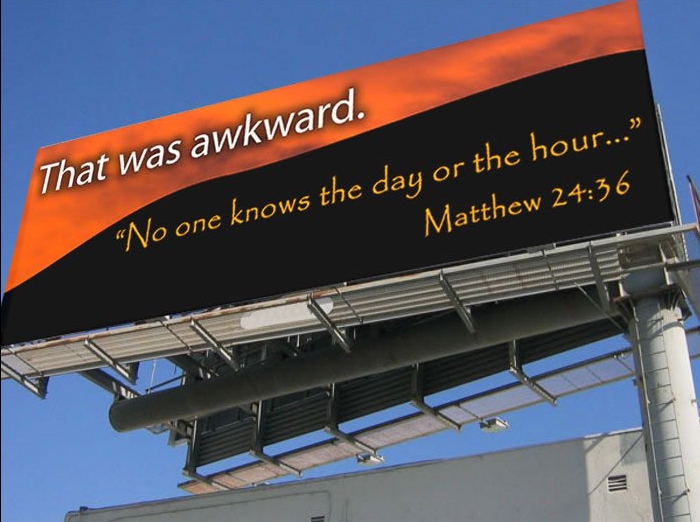 Evidently not May 21, nor October 21, 2011!! So many miscalculations so now it is my turn… I am soliciting a little help from 2 Peter 3 and his three-fold reason as to why the parousia was still future for him, and as it turns out for us too. (Before looking at his perspective, it is worth noting, as an aside, that although he uses language that could be pressed, if taken literally, to mean the destruction of creation this is not likely his meaning. Two reasons – he uses typical apocalyptic language (strong metaphorical and physical language to describe the significance of an event, not to describe the literal result); and the second reason for not taking it as literal is he has already stated that the flood had ‘destroyed’ the world of that time. It did not physically and literally destroy that world.)

Peter seems to list three reasons in response to those who mocked about his ‘coming’ (2 Peter 3: 3, 4; parousia, the common word related to his coming, and carries the meaning of ‘presence’). The three factors are laid out in verses 8-12.

But do not forget this one thing, dear friends: With the Lord a day is like a thousand years, and a thousand years are like a day. The Lord is not slow in keeping his promise, as some understand slowness. Instead he is patient with you, not wanting anyone to perish, but everyone to come to repentance. But the day of the Lord will come like a thief. The heavens will disappear with a roar; the elements will be destroyed by fire, and the earth and everything done in it will be laid bare. Since everything will be destroyed in this way, what kind of people ought you to be? You ought to live holy and godly lives as you look forward to the day of God and speed its coming.

But the jewels, the gold, the precious stones? They originate here. Wood, straw and the like are not part of the materials God will use, and Paul acknowledges (in the context of ‘temple’ construction) that there are apostles whose works are simply that. How they work will not survive the fire, it will be considered of no eternal value. In that light he provokes us all to consider what our works consist of. God will and is building with the material that we supply that passes the fire test.

When will he come? When the work of Christ is finished… the aspect of his work that he is now doing through the body. Jesus explained to his disciples that his food was to do the will of God who sent him and to ‘finish the work’ he was given to do. And in like manner so he sent us… to finish the work.

It is time to get an eye that sees the world that is to come, the world that is the other side of the fire that destroys all unrighteousness. What world do we see? If we are to hasten that day then we need to align our lives with the values of that world, not this; we must sow seed now that is the seed for that harvest. Small acts now, but vital ones. The mockers mock, but the seers work.