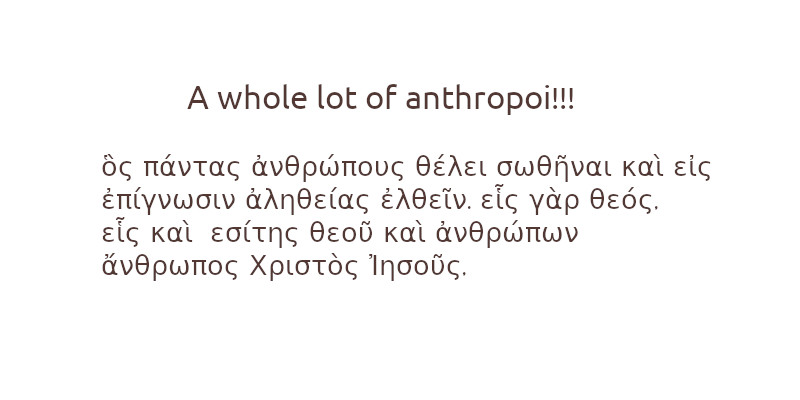 No need to read the verses above! Just a lot of the word ‘anthropos’ that appears there including the part that affirms that Jesus’ identity post resurrection is as ‘the man Christ Jesus’… and yet that is what I wish to challenge.

Jesus died, Jesus rose again. The body that went in the grave is the one that came out and there was a transformation of that body. He enters the grave male and comes out…

A little speculative theology about to be embarked on here.

I have considered the question about resurrection and gender in my little head before and had previously reasoned that if sexual identity is an element of my identity then resurrection would include that element. Recently though I have re-considered. So a little journey to get to where I am speculatively settling.

A few basics first, and in this terminology is not always easy. I consider that God is neither male nor female, but both masculine and feminine. Humanity (and I appreciate there are biological exceptions to this) are either male or female but both are masculine and feminine. In other words I am using male / female biologically and masculine / feminine to relate to characteristics, and in that open up the whole scenario to the critique of cultural and gender stereotypes.

Jesus was male and Jewish. Jewish as they were the redeeming nation that had lost the plot. Born of a woman and born under the law he came at a time when the ‘sins of the Jews’ had reached fullness:

Therefore this generation will be held responsible for the blood of all the prophets that has been shed since the beginning of the world, from the blood of Abel to the blood of Zechariah, who was killed between the altar and the sanctuary. Yes, I tell you, this generation will be held responsible for it all (Lk. 11:50,51 – ‘sins of the Jews’ is a cheeky, but I think appropriate, adaptation of the term ‘sins of the Amorites’ from Gen. 15).

The nation called to be the means of redemption are condemned under the power of sin and therefore needed a representative redeemer. He is the Jewish Messiah. He dies as a Jew – we will come back to his resurrection in due course on this. He is not only Jewish but male, not because of some inherent superiority in the male gender – far from it. Male, as male had partnered with the powers, as expressed in patriarchal rule. Such dominance is antithetical to the kingdom of God. Jesus, as male, broke, through his relationships, behaviour, words and action this male dominance. A simple example of his cultural opposition to patriarchy is in Luke 11: 27,28:

As Jesus was saying these things, a woman in the crowd called out, “Blessed is the mother who gave you birth and nursed you.”
He replied, “Blessed rather are those who hear the word of God and obey it.”

Her world view spilled right out in the presence of such a truly human presence. A woman’s status was like climbing a set of steps to the pinnacle. A woman needed to be married (step 1), to have children (step 2), to have a male child (third step) and the ultimate was to be a woman who not only gave birth to a male child but to a rabbi of the stature of Jesus. In one short sentence he corrected this totally. A woman’s status was not tied to her marital nor maternal relationships. Males are not superior, females are not subservient.

He is male, not to demonstrate superiority, but to deal with patriarchy. Unless sin at the sharp end is dealt with there can be no redemption. If he dies as Jew he dies for the world; if he dies as male he dies for humanity. Now to the resurrection.

There is in heaven a human mediator:

For there is one God and one mediator between God and mankind, the man Christ Jesus, who gave himself as a ransom for all people (1 Tim. 2: 5,6).

I chose this translation with all its clumsy male language deliberately. ‘Mankind’ would be much better translated as’ humanity’, and the term the ‘man Christ Jesus’ is the generic ‘anthropos’ (humanity) not the specific ‘aner’ (male). Jesus was male, he (?) is now still fully human, but this verse leaves open the gender issue in the sense of ‘male’ or ‘female’.

3 thoughts on “Certainly not all Greek”