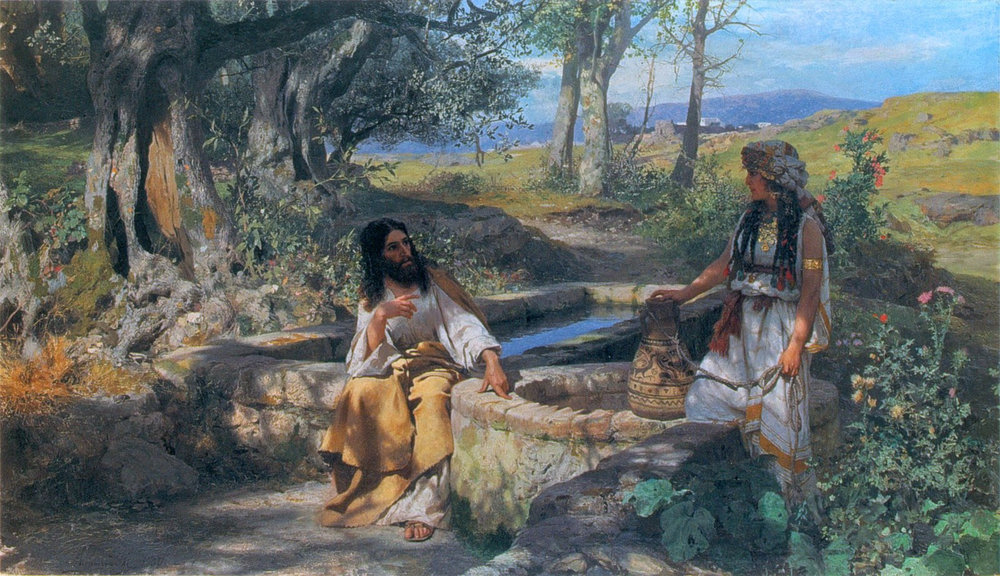 Sychar. A well. John 4. Sychar – the Samaritan village, the Greek name could well be a translation of Shechem (more later), and the village might well be the Shechem of the Old Testament (I think so); if not they were in very close proximity… So first trip back: Shechem.

Genesis 34. Dinah, the daughter of Jacob is violated; the sons of Jacob do not find a way through this other than to respond with anger and murder:

On the third day, when they were still in pain, two of the sons of Jacob, Simeon and Levi, Dinah’s brothers, took their swords and came against the city unawares, and killed all the males.

I do find it intriguing how often we read ‘on the third day’ in Scripture! However, the key point here seems to me to be that the land is locked in a painful memory with the sin of abuse and the response of murder. The land holding the corporate memory. So much pain locked up (can only be released through forgiveness / cleansing), and I suggest manifesting very visibly in the woman at the well.

There was another well in Sychar, one much easier to access, but here we have the woman journeying outside the city, and not only but she is doing at in the midday sun. She is no insider with privileges.

But wells… So many biblical stories set the well as the place of romance. Gen. 21 the servant finds Rebekah at the well ‘outside the city’ and he knows that she is the one to be married to Isaac. And given that this is the well of Jacob, we also find that Jacob’s family history involves a well and romance:

Then Jacob went on his journey, and came to the land of the people of the east. As he looked, he saw a well in the field and three flocks of sheep lying there beside it; for out of that well the flocks were watered. The stone on the well’s mouth was large, and when all the flocks were gathered there, the shepherds would roll the stone from the mouth of the well, and water the sheep, and put the stone back in its place on the mouth of the well.
Jacob said to them, “My brothers, where do you come from?” They said, “We are from Haran.” He said to them, “Do you know Laban son of Nahor?” They said, “We do.” He said to them, “Is it well with him?” “Yes,” they replied, “and here is his daughter Rachel, coming with the sheep.” He said, “Look, it is still broad daylight; it is not time for the animals to be gathered together. Water the sheep, and go, pasture them.” But they said, “We cannot until all the flocks are gathered together, and the stone is rolled from the mouth of the well; then we water the sheep.”
While he was still speaking with them, Rachel came with her father’s sheep; for she kept them. Now when Jacob saw Rachel, the daughter of his mother’s brother Laban, and the sheep of his mother’s brother Laban, Jacob went up and rolled the stone from the well’s mouth, and watered the flock of his mother’s brother Laban. Then Jacob kissed Rachel, and wept aloud. And Jacob told Rachel that he was her father’s kinsman, and that he was Rebekah’s son; and she ran and told her father. (Gen. 29:1-12).

Jesus comes to the well – what does he talk about? Husbands, marriage…

Then the contrast with John 3. Nicodemus – male; comes at the darkest hour; a teacher in Israel with the Law, the Prophets and the Writings; and he needs to be born again!

John 4. Unnamed woman; at the brightest hour; a Samaritan with only the first five books of Moses; and not told to be born again! (There are other contrasts.)

Jews did not walk through Samaria when heading north, they avoided the area and the journey took them considerable extra time. Jesus deliberately goes that way. Then comes the highly controversial exchange of conversation. He deliberately went that way to bring a release to the woman, but also to the land.

Something was going on, and at least the disciples picked that much up!

Just then his disciples came. They were astonished that he was speaking with a woman, but no one said, “What do you want?” or, “Why are you speaking with her?” (John 4:27).

The second question (not asked) was of course aimed at Jesus (‘why are you speaking with her?’. The first question? I think perhaps also aimed at Jesus! The question is: Τί ζητεῖτε, a literal translation would be ‘what are you seeking?’ Joanne Guarnieri Hagemeyer suggests it is a translation of a Hebraism, meaning something along the lines of:
“What are you looking for in life?”

The same phrase occurs as the first words in Jesus’ mouth in John’s Gospel when two of John’s disciples come to him. He says to them: Τί ζητεῖτε. Same phrase. In that context those two disciples of John having heard that Jesus was the Lamb of God, they began to follow Jesus. Then Jesus turns to them and said, “What are you looking for?” (John 1:38, as stated aready the same phrase as in John 4.) ‘What are you about, what is it that lies at the core of your being?’ Maybe that is putting it slightly too strongly, but it was certainly not a surface question but one to penetrate to the interior of someone.

Now if that question – ‘what are you seeking, what are you really about?’ – that first question forming in the minds of the disciples was aimed at the woman it is quite radical. But what if they are really so provoked they are aiming it (also) at Jesus. No one dared ask, ‘What are you about? What is at the core of your being?’ Their shock is not at the woman, but that he is talking with a woman. What is Jesus about? ‘What are you seeking, Lord?’ ‘What is at the core of your being?’ are questions that still remain.

I kind of think the question is aimed at Jesus. Jews in Samaria, Jesus deliberately going there, talking with a woman at a well, in a place where abuse and murder had locked the land up. This Jesus is not one that is easy to understand. Not then not now!

So maybe just to add this. We have no dealings with…. (fill in the blank). We will avoid journeying through that territory. And if we do Jesus will probably send us off to get some bread, i.e. so that we don’t mess things up for him; he will push to touch the land and all those enslaved by the land, and are marginal. It will leave us asking of Jesus – what on earth are you really about? What lies at the core of your being, Lord?

One thought on “A trip back in time”