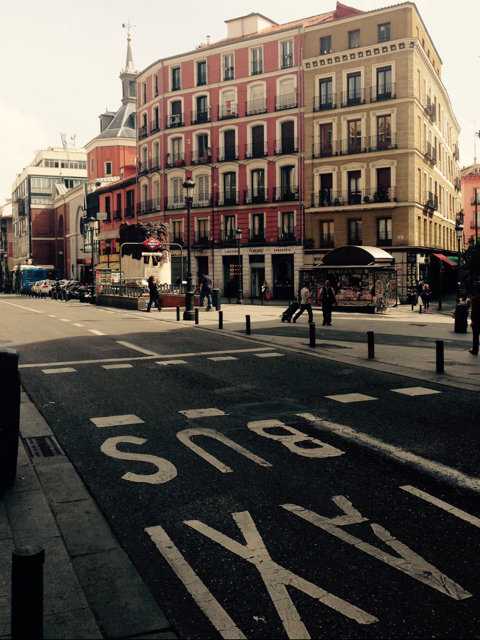 Unbelievably it is 3 years ago that we were able to get an apartment in Madrid. Three whole years. I was looking at the picture that is on my FaceBook page (the page I ‘never’ look at) and here follows a little explanation (Plaza San Martin). Since 2012 we have always stayed (AirBnB) on that side of Madrid, nearly always in the ‘Lavapies’ barrio, at the bottom of the hill it (literally) means the place of washing feet. It has always been a place that has drawn the immigrants (seems appropriate as that is who we are to Madrid and to Spain), a challenging place where drugs are easily available, the drugs scene run in the main by Chinese mafia with foot soldiers often drawn from the African community. Since 2012 until 2018 we have (all-but) prayer walked every street of the barrio. Gentrification is setting in – the good side it can ‘lift’ a community, the down side of course is that people are squeezed out. We have tried to use the apartment as gift when we are not there, and I am always amazed at how within our hands there will always be something we can do that is small but sows into a future. The ultimate small is the ‘container’ for glory in the Bethlehem context that we mark at this time of year.

Land is interesting. It is the container for the corporate memory, hence can resist renewal or can be very open. Lavapies… a great history.

Quite a crowd, with the photograph taken in 1977 and of a funeral cortege in our area. In January, seemingly in order to provoke a reaction so that the military would have to step in and reverse the democratic process post-Franco, three gunmen entered a lawyers’ office and killed five of those present. However, it appears that the desired result did not take place. On the day of the funeral the response called for from those who identified with the victims was one of responding in silence and not to participate in any violence. As can be seen a crowd of some 100,000 gathered, without any physical retaliation. It is said that rather than reverse the democratic process it was a major catalyst in moving it forward.

Right in the centre of the area (Anton Martin) is this memorial to that event. The ‘hug’ says it all, and at the top of the plaque is a quote:

If the echo of their voice weakens, we will perish.

This is our area, and each time we walk past that memorial it is indeed a memory provoker. Beyond our memory that land has a record of it.

How many places are there that we can stand on the shoulders of those who have gone before, those who had faith and those who did not, but they knew somehow that their responses were sowing for a future. Add to that a true apostolic vision, marked by long term patience aligned to consistent direction, and I am sure there are many geographic situations that are waiting for us nobodies to connect with.

6 thoughts on “Our neighbourhood”