Joanna sent me a couple of poems on reflections that I asked if I could post here. She has been on a number of Zooms with me, like us all with questions (are there really more questions that answers, or am I simply discovering that I am not as smart as I once was / thought I was?). Below is the first one followed by her ‘bio’ in her words. I will publish the second one tomorrow.

In this poem I think I was inspired by a variety of themes. I was talking about the presence of God in the mountaintop experience and in the valley. Psalm 139 came into it – where can I go from your presence etc.? My own inability to rescue myself. Also reflecting on the divisions in society and political polarisation (particularly at the time when Brexit and Trump were big issues) and the weakness of selfishness and hate. Also descent of love in the person of Jesus into the abyss and the ultimate triumph of love over all experience,resurrection. God is love…

Beneath the pinnacles
Of high ecstatic bliss
Beneath the oracles
Of wisdom unending
I stand, I sit, I lie
Searching for the inerrant truth
For the utter heights
Of giddy redemption
Of everlasting light

Boxed into my shadowy dwelling
Beneath the grassy earthen roof
By unharmonious voices
I push against the absolute
Against the harsh wall
Of implacable certainty
Human thought may vary
Violent, utter, hard
But love speaks louder
But love has the first word, the last word

Swimming against the flow of the false positive
She transcends the dead work of human slant
She swipes at death
Her beauty soars swiftly
Up, up into the heavens and beyond
And bathes creation in her rainbow glow
Cradling all the broken fragments of humanity
In her tender arms
Kissing the earth
With a mother’s mouth

I am Joanna. A mother of a 22 year old daughter, Katie and a wife of Derek. During 2007-2010 I experienced a real awakening and experienced a powerful move of the Spirit through various ministries and at my church. I prayed for many people and it was powerful sometimes. However in May 2010 when I was 42 years old my life changed forever when I experienced a small but devastating Cerebellar stroke. It affected my balance and has caused me perpetual vertigo ever since mainly a rocking sensation and is an unseen disability which greatly limits my life. I had to give up my job working in a university library which I loved mainly because of the friends I made there and our wonderful relationships. So I have lived 12 years in the desert effectively and suffered a great deal at the hands of my illness which has led to trauma and anxiety. It has caused me to at times be in deep despair and to question my faith and whether I even have a place in this world. However, it’s as the disciples said to Jesus when he asked them if they still wanted to follow him ‘where else would I go’. I have known him in the valley and on the mountaintops in the past and he is ever present in both places though I experience him differently now than I did. It is more of the still small voice than the waves of his presence and experience of glory etc.than I felt in the past. I would love to be healed but have learned to accept things to some extent and wait to see if things may ever change? I do my best to be ‘salt’ and ‘light’ where I find myself but fail I’m sure on many occasions. I am always searching for answers and understanding though which is partly why I have written poetry and other reflections on issues affecting our world. 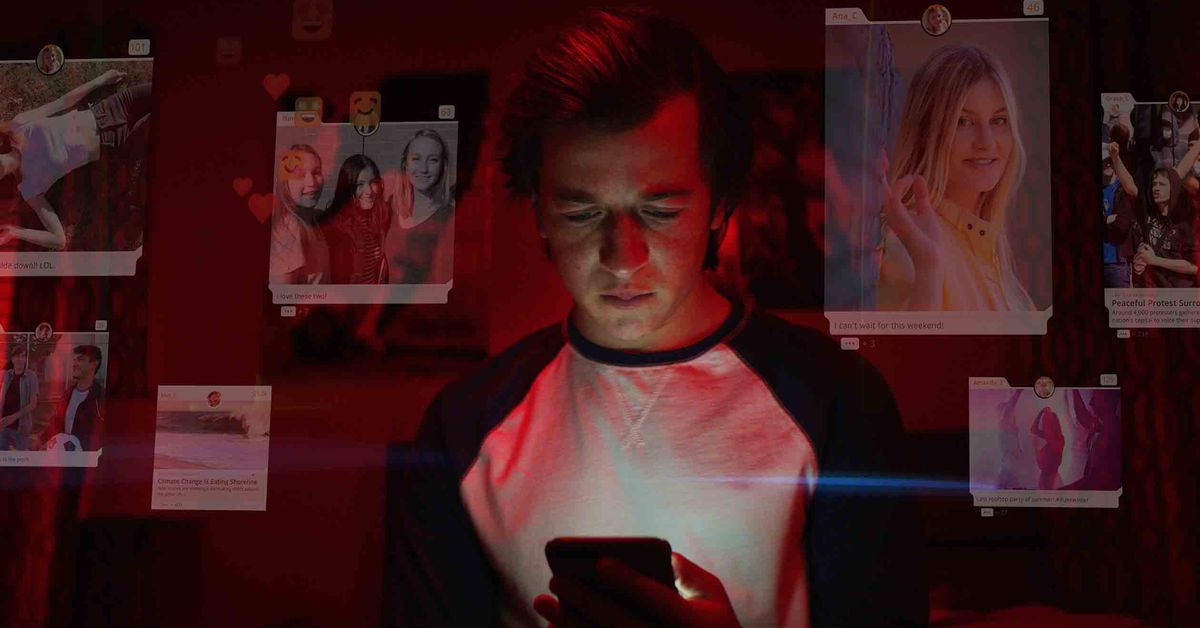 We recently watched this film ‘The Social Dilemma’. Frightening as it exposes the algorithms that give us feeds that are in line with our tastes / ‘biases’. So if I read news feeds, social media ensures that what I read is in line with my political bias. The term ‘fake news’ is so abused, but if I read conspiracy items aligned to one side of the argument I will receive yet more items confirming the conspiracy. Eventually my rightness will be confirmed by many voices, and I will be closed to any contrary voice – indeed I will not even be able to read them as they will not be fed to me. If I do come across any it will instantly be discerned as ‘fake news’. All driven by advertising so as I get it all for free. Free as in ‘at the cost of my own soul’.

I would love to be analysed as to what I read and why. I am not on social media – yes this will be linked to a facebook page – but I am never on facebook, never read if anyone leaves a comment there (well maybe I have read one or two this year). I am not on twitter, dah, dah, dah. But I am still pretty sure that pure Mr. Scott is not exempt.

If I was (just by way of example!) of a left-leaning politics my feed would be hyper at this time in the USA pre-election. (Coming from Europe I am not sure what with as Mr. B running is anything but left wing… even the suggestions is that former president Mr. Ob was more right than many of his predecessors from the Republican party!) If I was (and this time it is genuinely by way of example) of a right wing persuasion my feed would be biased in the other direction all-together. The result – the divide is exaggerated; civil war at one level or another. [BTW I suggest that Jesus would label all war as civil war – war against ourselves and fellow humans.]

I have to confess that once we make an alignment we are in great danger. If we do not realise that we are biased and find it hard to hear the opposite we will soon be in trouble. (We were privileged – now almost two years ago to have a conservative, anti-Brexit person staying with us. So good to hear from them. So hard to listen, but I think we managed to listen.)

So we are biased. The ‘other’ is biased. The question we ask is ‘are you for us or for the other?’

If we are to sow any seed that has any element of the Gospel in it there has to be seeds of love, respect and peace. Once we sow anything that is dehumanising we have lost the plot. A call to pick up arms (literal), or to revert to using the arms of hate speech (and maybe words are more powerful than arms as hate words fashion arms and they become more lethal as a result) can never be used.

The difference that has to mark us out cannot be what news feeds do we receive. The bias was already there, social media just exaggerates it. The difference has to be love. And if love can be present there is room for faith and hope. 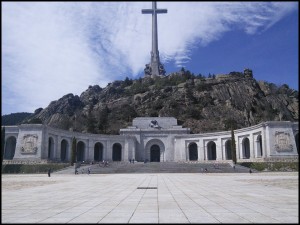 The cross over Franco’s tomb provoked for me a serious question as we went there to pray in the Spring of last year. My question was whether if one uses the cross in a wrong way does it tap into the power of the cross and release that power, but release it negatively – a little like electricity (as a ‘good’ power) lights and heats a house, but if wired wrongly it does not serve well but is actually destructive. Some of that did not fit well with me as the power of the cross is not some sort of abstract power source. God’s rule is kenotic, is self-emptying love, not some sort of sovereign crushing power. But why the cross?

I am considering that we have two crosses which, dependent on which cross is chosen, of course will reflect back somewhere into the nature of the Gospel. There is the Constantinian cross (‘in this sign you will conquer’) that can be placed on the banners and it results in yielding evidence of its power by vanquishing all foes. As such it is aligned to an imperial power, and fits well with Christendom and all forms of getting the right person(s) in power. It was that kind of cross that manifested in the Civil War with Franco being a ‘son of Spain and a servant of God’. His conquering of the land was for the uniting of Spain and the uniting of it under God – a repeat of the ‘Reconquista’ that saw the Muslim rule in Spain end. A ‘Christian’ conquest that fitted with the wider context of the Crusades to rightly align Jerusalem to God. That cross gives us a right of power over and we are vindicated by it when we use force to establish righteousness, as that cross itself is a symbol of power.

The second cross represents a power of a different kind. It does speak of imperial power, but only when used against us. It is carried as an instrument that can be used by others – it is the same spirit as when Jesus sent out the disciples as ‘lambs among wolves’ (guess the favourite meat in the restaurants that wolves frequent?). There is no protection… unless heaven itself is involved. It takes faith to suggest that in the process of living for God that ‘no-one can take our lives from us’ but that the course we are on means we will ‘lay down our lives’ for others. It takes a whole load of faith to believe that such death is not the end, and in that death there is an undoing of imperial power.

The second cross is not the conventional sign of strength. Yet it is through that cross we are aligned to the God of heaven who give us a strength of courage that does not insist on one’s own will.

This (might) have implications for both the Gospel (good news) that we believe in and how we present it. Sovereignty will demand being appeased (Anselm: God’s honour to be restored; Reformers: an eternal debt to be paid). God will have to be bought off somehow. If we respond we will then be on the right side, all others on the wrong side. The cross as satisfying the wrath of God, that wrath being understood in personal terms. If the cross however fully satisfies the love of God, it becoming the symbol and act (when aligned to the resurrection) that fully shows us who our God is, then the work of the cross is to do a deep healing in us, to re-humanise us, to remove the scapegoating of the ‘other’, and to release us as reconcilers for the sake of others. This view of the cross will work more (note the word ‘more’) with alienation, shame and sickness than with ‘guilt’. It will see the necessity of Jesus’ true humanity being for our sake rather than for God’s sake.

The cross is to re-humanise us. The work that has to be undone is that of de-humanisation. The latter we all need to be delivered from. I don’t think the imperial cross can help at any level to re-humanise us and align us with the re-humanising God. Somewhere on the spectrum of the two crosses one seems to me to be a parody of the real one.