‘Money makes the world go round’… and round… and round… or so it seems. Pensioners were out in force this past weekend in most of the cities of Spain protesting. The government has used money from the pension fund on at least 3 occasions to bail out financial institutions, and other businesses the government wished to favour. A while back a woman working in the political scene in Madrid told us that anyone 55 and under should have no expectation of a pension at retirement, the money will be gone. Never enough money in the pot, until it seems it can be found for something more important than those who need it!

A few years back we heard an African preacher (Langton Gatsi) push hard on the difference between creational wealth and money. Money can be here today and gone tomorrow, creational wealth continues. The stock markets can ‘miraculously’ lose money one day and gain it another. This is why in most Western nations the amount of money that is real is about 3%. 97% does not even exist, and by that is not meant that only 3% is in the form of currency, something deeper is implied. 97% are figures on a spreadsheet. A run on the banks would be disastrous, and not surprising when the system survives through debt. Without debt the western economic system collapses.

‘Can’t buy and can’t sell’. So the beast says. Trading with money.

However, there has to be a pragmatism. Jesus even said as much with

I tell you, make friends for yourselves by your use of dishonest wealth, so that, when it fails, they will welcome you to eternal dwellings (Luke 16:9).

We live in a fallen (dirty?) world, and only at the extreme end does there come the call to ‘come of her’. So assuming we engage, there is an inevitability of our ‘feet’ becoming dirty and needing to be washed. Dirty feet seems to be unavoidable, but what must be avoided is having a dirty heart on these matters.

Here then are a few bullet point thoughts:

A few days ago I re-posted the material on Judas where I consider there is a strong element of Mammon running throughout that narrative. Jesus was not conquered at any level by Mammon, and the strategic victory takes place in the wilderness where he refuses the offer of ‘the kingdoms of this world’. Then on a daily basis the presence of Judas was where that battle continued. Never once did Jesus put money before Judas, always people took precedence over money. I suggest that en route to breaking the hegemony of religion the refusal to submit to Mammon was a necessary step. Money is neutral but the system locks money up under the spirit of Mammon, the result is the reward of some (but not their release) and an increasing captivity of a majority. 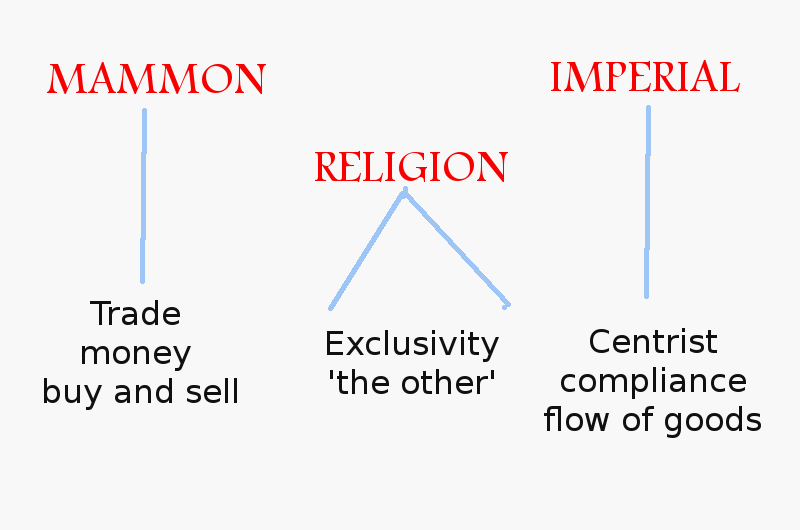 I consider that Jesus conquered the spirit of Mammon decisively. This gave him authority to break open the religious spirit that is so often twinned with Mammon. The Temple in Jerusalem, now had fallen to the extent of being a den of robbers. This did not mean that people could not meet God there, for God can show up in the most dark of places. Even Judas seems to unknowingly act out that severing of the tie between Mammon and religion by throwing the money back in the Temple! It is not his act that makes the break, that is done at the cross but his act is a powerful sign of what has been done at the cross. The lie of Empire continues (make Rome great and the world will be blessed) while the real flow is ever to the centre. Religion of all kinds, theist, polytheist or non-theist, can be seconded to the Imperial power to promote the well-being and continual existence of the Imperial powers. Indeed I suggest religion becomes more important to the Imperial powers at two phases: at a time when there is a push for even greater level of greatness or when there is the fear of losing control.

All three have something in common. They draw a line of who is in / who is acceptable. The language is different but the effect is the same.

Jesus, nor Paul in the ‘secular’ outworking of the Gospel allowed faith to become the support for the status quo, but considered that faith was there to challenge the world order as is. Surely that approach continues to be the call to those of faith?

5 thoughts on “Wealth or Money?”