The series explores a theology that is human friendly! Jesus as the true human shows us who God is, and because of his consideration for us ('who are we, that God should make note of us?') defines who humanity was created to be. The nature of sin is to fall short of the glory of God. The glory of God as revealed in the truly human one - 'we beheld his glory full of grace and truth'. This volume is a foundation for the other volumes. And there are ZOOM groups available...

A while back (2015 – 40 years after his death) we prayed at the tomb of Franco asking as a sign that ‘an earthquake would go throughout Spain’. Two months later in the biggest shake up in Spanish politics most newspaper headlines were ‘a political earthquake has gone through the whole of Spain’ with commentary that the results had never taken place in the period of the democracy. Then last summer we visited Franco’s birth place to cut off the roots. The next day the government passed that his body would be removed from the Valley of the Fallen. We rejoiced!!

We have just visited Madrid for 48 hours and one of our ‘projects’ was to visit the Cathedral where the Franco family want to have his body re-buried. This would not be good as the Cathedral is easily accessible and the tomb could become a shrine to Nazism. We have been very aware of the battle since the summer. One of the aspects we have discovered is that we can get a breakthrough and that the whole situation seems to come back around with a vengeance. It is a learning curve for us and we are seeing that we need to go to a level deeper each time. 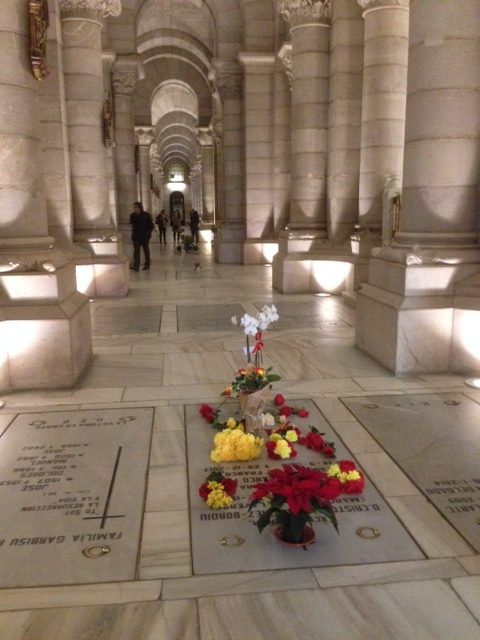 The image is of Franco’s only direct offspring’s tomb in the family crypt that they purchased. How to go deeper? Well we prayed for sure, but placed a blade of grass on the tomb among the fresh flowers. A blade of grass! Grass has its time. Grows and withers. There is a time that is over… so we put down the blade of grass, prayed, then went to the entrance to the crypt saying not in here.