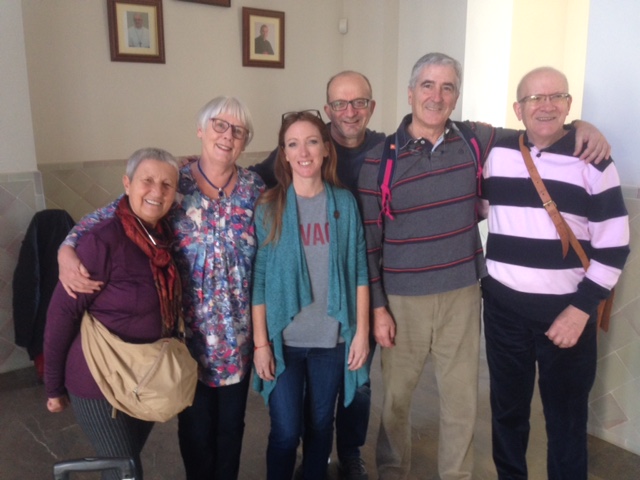 Oliva – Madrid – Cadiz – Malaga – Oliva and Wednesday back to Madrid. 2000kms in the last few days. Our time in Malaga was very enriching, connecting with a small group of artists from across Spain. It was stimulating and great to be with people who were not pushing themselves forward. If egos were present they were pretty hidden! It was also a great privilege to meet in Spain with David and Karen Underwood. I first met them 42 years ago. We have connected from time to time over the years since and to see how they have invested into Spain and into this arts group was great. (David is far right in the photo and Karen next to Gayle. Vicente and Amor, the other couple in the photo, live in Barcelona and were two among a number we connected with.)

While at the gathering a Scripture was quoted that if ‘you are not with me you are against me’. I said that there was a Scripture that said that and also one that said the opposite, both from Jesus. I had never looked at them before at any depth but was provoked to find them now that we have a few hours at home. Here are the two:

“Master,” said John, “we saw someone driving out demons in your name and we tried to stop him, because he is not one of us.”

Whoever is not with me is against me, and whoever does not gather with me scatters (Luke 11:23).

It is great when we find contradictory statements in Scripture (another example from the book full of wisdom: answer a fool according to his folly… do not answer a fool according to his folly…). Contradictory statements challenge us about being so sure as to what is the right approach. What interested me in both these Scriptures was not simply the context but that both were related to demons being cast out. The first being of a, I suppose, Jewish exorcist using the name of Jesus to cast out demons. We assume successfully unlike the scenario in Ephesus with the sons of Sceva. The second passage is against the backdrop of Jesus casting out a demon and some responding that he did so by being aligned to Beelzebub, the ruler of the demons (11:15).

Both passages are about bringing deliverance and freedom to someone. The first passage concerns a person who was ‘not one of us’ but Jesus declares that such a person is ‘for you’. Jesus clearly came to destroy the work of demons and to set people free from their rule. Those who opposed that liberating work aligned themselves against him and it was those people that Jesus said were against him.

There seems then to be a principle here. Those who are working for and desiring a future where people find freedom from oppression, from powers that dehumanise, regardless of what faith boxes they tick are ‘for’ us. We should not try to ‘stop’ them nor see them as ‘not one of us’. Those who oppose liberation? They are not with Jesus. And what if they tick the right faith boxes?

One of the wonderful aspects of the days in Malaga with the arts group was that it was Jesus-based but not all those there had faith. They were open about that. There was clarity but no coercion. We were rightly provoked by all we saw and heard and have come home enriched because in and through it all Jesus was so present.

One thought on “So which is it?”