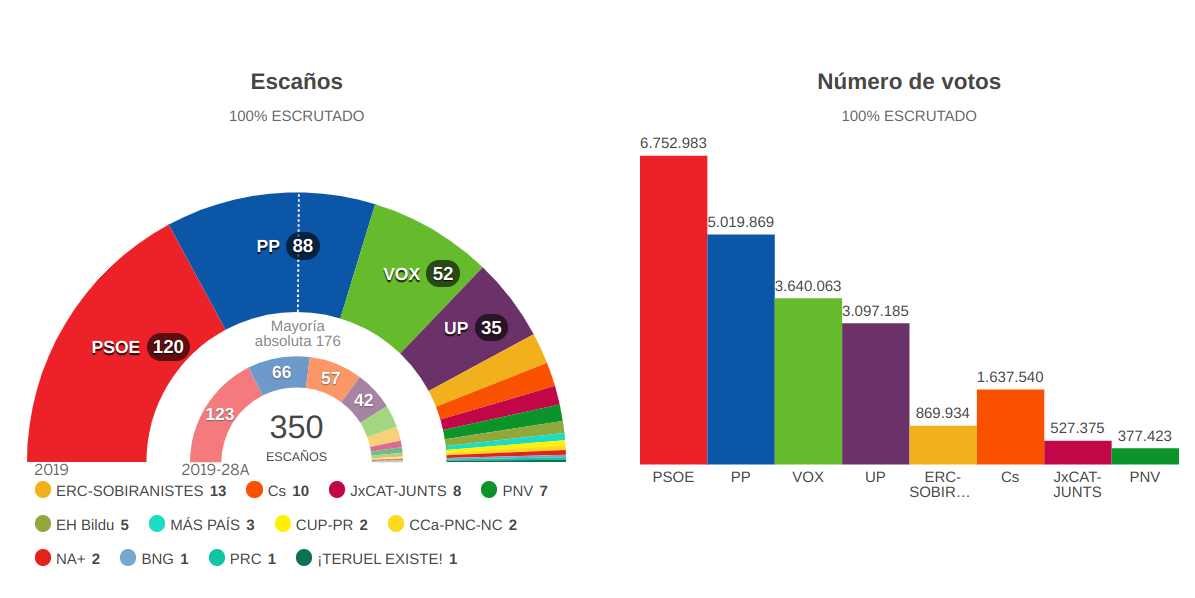 Four elections in four years… Spain, but typical of so many places where there is political turmoil or lock up. A coalition did not come together as a result of the elections in April, and given the results this time round a coalition will be even more challenging. The big news is the phenomenal growth of the extreme right. In 8 months a growth from 0 to 24 and now to 52 seats. Around 7% of the new parliament will be from that party – the largest percentage from that wing in any European country… and from 0% a few months ago. Absolutely gutting… as it has taken place on our watch.

We physically went to the geographical setting in Madrid months ago where there would be a threat of entrance. We declared ‘no pasarán’ (they will not pass), and some of the first words proclaimed by the far right in parliament in April were ‘we have passed’. We, this past week, went to a street, prayed and went round the whole block scattering salt on the road. The evening of the election, and we did not know this would happen, the very corner where we began the prayer was where the extreme right met to celebrate. Hard not to see it as personal!! And struggling with the results and our focused activity and prayers. Where did we miss it?

Our perspective is that coalition was not possible last time round because the financial institutions, the day after the April election, declared that there was one coalition that would be acceptable. The very coalition that the supporters of PSOE (the party who won in April but without an overall majority) shouted on the street was not acceptable to them. They shouted that specifically the night before the institutions declared what was acceptable.

Money, so controls. (Why was it again that Jesus appointed a thief? Why are so many of the OT laws about economics? Who is that says you will not buy and sell? Note to self – must go and read that book that seems intent on giving us answers to those kind of questions.)

Meanwhile there never was a desire for a coalition. The intent was always to go for a re-run of the election. This has backfired on the acting president (PSOE). It has not strengthened his hand but weakened it.

In the campaign a strong anti-Catalan independence was used by all the main parties (except one) as that gets a vote. Now any coalition will only be possible with some measure of support from the pro-independence parties from Cataluña.

Are there any silver linings? Of course there is always the possibility of positive spins. What was there is revealed – yes for sure. BUT, BUT when results come through as we have seen what was already there is strengthened, permissioned and multiplied. Our responsibility is to see that does not happen, and here we are!

Maybe the most positive is that for any move forward it will mean some humility, embracing of others (Cataluña for example, where dialogue is so needed).

Silver linings… Always but the clouds were dark.

Here though are a few great aspects in the latter stage of the campaign (with a biased viewpoint, but maybe one with some accuracy?).

The mayoress of Barcelona, Ada Colau, came to Madrid, on the final evening of the campaign. She addressed the crowd in Catalan, saying the place where she wanted to be was Madrid, there being no better place to be, as an act, of reconciliation at this critical time. She came bringing a hug from Cataluña.

Between the two elections there was a significant split in the Podemos party with a new party being formed. This, of course, split their vote and if the voting numbers were added together (of Podemos and Mas Pais) they would have been the third voted for party by percentage of votes, not the extreme far right party as ensued. Sure it was damaging. Mas Pais did not do well. Pablo Iglesias, leader of Podemos, sent a note to the leader of the party that split away, saying – I know this will have been a tough day for you with the disappointing results so I send you a big hug.

There is a politics at grass roots, a politics that might not be to everyone’s liking, but one that shouts that ‘love’ is the only way forward. I don’t know if that is a silver lining or not. Maybe… but even if there is no silver lining, when there are people (and ones who don’t profess a faith in Jesus) talking ‘love’ and willing to reach out hands across divides, there remains hope in a divided land.

PS… As I write some breaking news with a change of tone from Pedro Sanchez. First step… maybe silver linings!