So many changes – temporary or permanent? It seems to me that the Jewish law of Sabbath(s) culminating in the Jubilee reset of all resets acknowledged that changes were temporary. Otherwise why the repetition? Change instructed by God to the government of the land because a wonderful entrepreneurial gift was often harnessed to serve self-seeking interest and so everything could quickly get out of control. The instruction to bring about a re-set. A re-set of focus every 7 days; a reset of trust in God and a confrontation of ‘drivenness’ every 7 years, and a national radical economic reset in that 50th year.

Israel, instructed by God, as theocracy which no government today is – thankfully!! To be outworked by the government of the land with Israel’s laws continuing as paradigmatic patterns for justice – but thankfully not stronger than that. A Jubilee year twice a century seemed to be enough in that culture to bring things back to a true normality, not to some untrue new normality.

A Jubilee twice a century just would not cut it for the West. A certain gentleman’s personal wealth increased recently in a day by 10bn – can’t remember whether that was $ or £ or €’s. Now that really would make a difference dependent on what currency it was in!! (What does one do with 10bn?) Economic growth in an agrarian culture of a few millennia ago cannot be compared to economic growth of today.

A ‘re-set’ for the ekklesia, a ‘re-boot’ for the oikomene (inhabited world, a very common description used in the political cartoon world of Revelation, from the root word for ‘house’ and one from which we get our word ‘economy’).

A little more negativity: with the increase of the virus so is the use of plastics increasing; plastic gloves available in supermarkets, hand-wash in yet more plastic containers, take out food in… Today I also read (an aside) that every person is using a gadget with a battery that has been produced with children (in slavery) to mine material for it. A ‘re-boot’ – really?

And for us as believers we really have got to kick out of touch the idea that this whole planet is here for us to exploit, with the ‘after all what the heck it is all going to burn up in the end’ attitude. If I had time I would go on a rant about the total un-Hebraic nature of that concept – along with a rant on the ‘rapture’, secret or otherwise. Sadly I realise that the Lord has never been interested in convincing people to believe what I believe… now just imagine a world where we all believed what Martin believed…. or maybe not!

I have very reluctantly (there is normally a screech each day of my ‘frustration tyres’ as I brake and have to change direction) come to understand that God is more interested in what rises than in what is here that resists change. (Saul’s kingdom is over, the key to the future timing-wise is in the hands of David in spite of the continuing decades of Saul as king.)

Change takes place not when Mr B turns over his wealth to help re-balance the globe, but when the widow puts her ‘mite’ into the Temple treasury, or when Judas throws back the money into the Temple. Not one stone can then remain for long one on another. The place that was to be a ‘house of prayer for the nations’ always seems to be the real key. (Private thought to myself at this point – do I think that the ‘temple not built by hands’ will ever get beyond being sold out to self-interested-nationalism?)

Maybe it is a combination of little changes that could just prove to be the leverage mechanism to move more than we ever anticipated. Maybe to simply not eat of the ‘consumerist’ tree but to eat fruit from the others might be enough.

OK… my brake is on, the tyres screeched quite a lot today. But I am saying Mr B you make your choices, I have to make mine too. 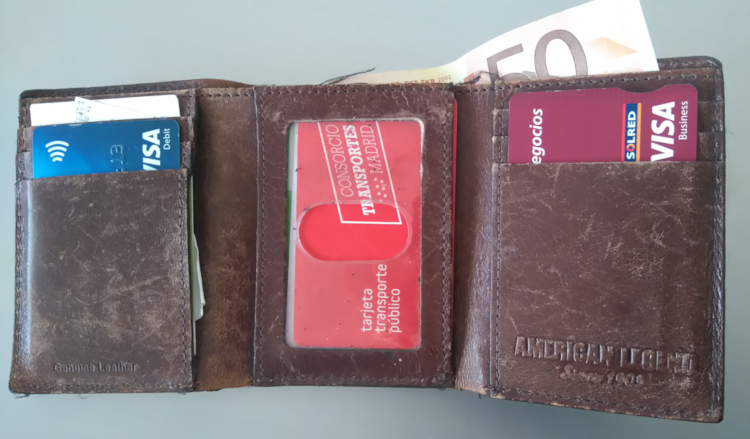 Christmas time is here. I am sure there will be many presents given and received. Maybe someone will receive a present of a new wallet / purse to keep all their worldly wealth in. Apparently Scripture seems to be offering two options this Christmas. One that was modelled way back in time set in a garden, and the other proposed by none other than a self confessed ‘chief of sinners’ and called as an apostle.

The two bags are consumerism and contentment.

I have suggested that the original sin is that of consumerism. The garden gives us a very generous setting – eat of all the trees, except for one. Only one tree forbidden! That is minimal restriction, indicating that whatever restrictions we embrace when responding to the call to follow Jesus, the reality is that there is enormous freedom within that call. The language of:

is the language of consumerism, and when set in the context of generosity is appalling, yet this is so common. When one has nothing it is understandable that someone should look and desire and seek to take, but when someone has so much there is that drive to obtain the one thing one does not have. I really need… Really need what? A bigger house, a newer car? We need?

The issue with the advertising world is that it suggests a lack that can only be filled with obtaining of something that we do not have. It comes close to robbing us of our dignity and identity only to sell it back at the price of the product. Consumerism does not open the door to growth because it works on the negative value of discontentment. In the garden there was the possibility of great growth provided we were willing to set contentment boundaries. So to the second money wallet / purse.

I am not saying this because I am in need, for I have learned to be content whatever the circumstances. I know what it is to be in need, and I know what it is to have plenty. I have learned the secret of being content in any and every situation, whether well fed or hungry, whether living in plenty or in want. I can do all this through him who gives me strength (Phil. 4:11-13).

But godliness with contentment is great gain. For we brought nothing into the world, and we can take nothing out of it. But if we have food and clothing, we will be content with that. Those who want to get rich fall into temptation and a trap and into many foolish and harmful desires that plunge people into ruin and destruction. For the love of money is a root of all kinds of evil. Some people, eager for money, have wandered from the faith and pierced themselves with many griefs (1 Timothy 6:6-10).

Contentment is not easy, and certainly comparison often leading to jealousy does not serve us well. Poverty is not seen as a blessing in Scripture, but to confuse financial prosperity with a sign of God’s blessing is likewise to miss the mark. Passivity is not to be equated to contentment, but thankfulness is probably the best and nearest companion to true contentment.

Contentment is the polar opposite to the consumerist spirit of this age. Maybe this Christmas I might just try one more time to look at the gift contentment might be to my soul.

And as I leave this post, I step back in amazement, realising that I was almost reflective in what I wrote.

Happy Christmas one and all!