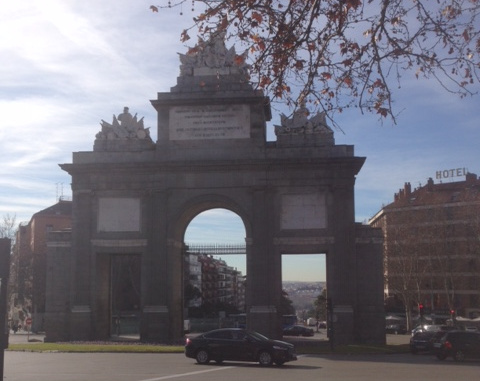 One of our first purchases in the supermarket was a bag of salt. We are / are called to be the salt of the earth. My understanding that the common salt of the middle east was the salt from the dead sea – full of phosphates it had fertilising properties and was also thrown on the effluence to help stop the advance of disease and such like. Salt – to accelerate and feed healthy growth and prevent the negative. Disciples of Jesus have a privileged calling. So salt was on the list to buy, and salt has been used – a little trail already at Congress with more to come.

Yesterday we went to the arch at the Toledo gate into Madrid. The road sign points to Badajoz and ‘all routes’. It was the southern gate and Napoleon was very interested in that geography. Underneath the arch he had buried a constitution that effectively made Spain subject to France; later the radical 1812 Constitution of Cadiz was placed there. That short-lived constitution has shaped so much within Europe and beyond. Once the monarchy returned the constitution of Cadiz was removed and replaced by a monarchy-friendly one! The power of locating things in the land.

Badajoz – we had some history there and were deeply impacted by the depth of the forgetfulness that the city has been subjected to. Where there is the place of deep forgetfulness it is the place that holds the memory most powerfully. The memory remains unhealed hence the power is not dissipated. This is one of the reasons why Spain in this next period has to go to a deeper level over the Civil War – and Cataluña’s memory is much deeper than the Civil War but there has to be a starting point there.

We began at the statue honouring the lawyers murdered in their office in 1977. That event had a strong impact on the shift from dictatorship to democracy and the current mayoress of Madrid was part of that group of lawyers. Vengeance was not called for, and the funerals that resulted drew huge crowds but they held both their peace and their voices.A great place to start our prayer. From there we walked the ancient path to the Toledo gate / arch. Avoiding both the traffic and the police we got ourselves into the middle of the arch.

When we followed the path from the north to the south we followed the geography of the ReConquista. That is part of Spain’s past that still is fuel for the radical side of Islam. Since our journey there has been a resurgence of ReConquista language, and in the most recent aspect of it, a ReConquista of Spain starting in the South and going all the way to the north. This has to be the starting point as this was where we finished. We stood in the gate to ‘say no… and salt on the ground. Signs point to the reality… and they pull the reality to themselves. Salt that stops the growth of what should not be present.