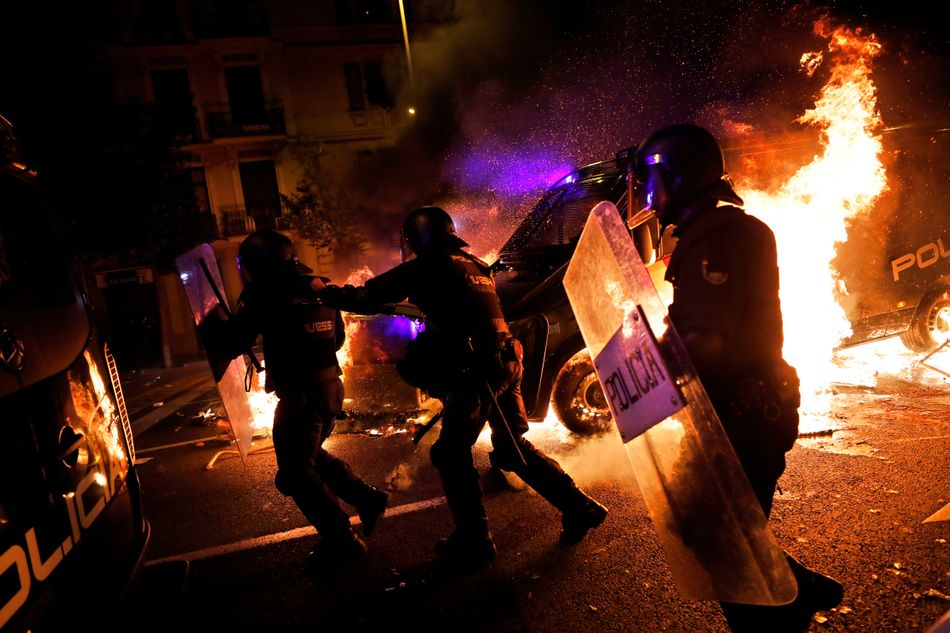 I do not know how much the current unrest in Cataluña is being covered in international press. Below is a link to a set of photos from the third night of unrest. At this time there are 5 marches also en route from across Cataluña that are due to arrive in Barcelona on Friday.

Photos of third night of unrest.

There are questions that arise at such times, though the questions raised are always present, just not in such a provocative way as they are currently. Two simple questions that can be asked (though not so easily answered) are:

The only aspect of such a clear crisis as we are facing currently is that it helps one to focus. It is ever so easy to go through life and not see what is there. We can isolate ourselves, even isolate ourselves inside the Christian community, even by experiencing heaven’s touch, but not face the huge issues around us. I passionately believe that ultimately the keys for change do not lie in a White House, a #10 or a Moncloa (or a Brussels!), but are in the hands of believers, who understand that ‘all authority in heaven and on earth’ are in the hands of the Risen Lord.

Of course the current crisis has a context. A long historical context where two stories have been rehearsed. A story of oppression, restriction and persecution; and an opposing story of rebelliousness, selfishness and greed. The immediate past few days have added fuel to the fire with the sentencing of a number of Catalan political leaders. The result has been a large divide. Some of course protest concerning the harshness of the sentences – sentences for enabling people to express a vote concerning their future, and that vote facilitated by those who do not have any accusation of violence against them. Even last night from prison, Oriel Junqueras who was sentenced to 13 years, was appealing for non-violence, saying that ‘this is not who we are.’ Others have called the sentence a disgraceful sign of state weakness, calling the action a ‘coup d’etat’, and the sentences a betrayal of the constitution. That extreme view can be seen with one party leader appealing to the king to intervene as the sentences should have been up to 70 years long.

There is a context historically, but there is also a context spiritually. In a few days we should have the bones of Franco removed from the Valley of the Fallen. For some 5 years we have been praying into the constitution of Spain, and four years ago went to the Valley of the Fallen where Franco is buried, since that time we have prayed into the Transition years (1975-78) as we sensed they were far from complete, though almost certainly a wonderful result given that the country was coming out of fascist dictatorship to democracy and with a Civil War as the backdrop. Just a few days ago the acting PM said that when the bones are removed the loop of the Transition will be closed. We are grateful for that prophetic declaration, particularly as we had not seen it so clearly.

The end of a loop! Little wonder so much has kicked off. At a personal level we leave one framework and enter another one through the doorway of crisis, whether that be small or great. Likewise if this is a shift to a new framework in Spain it is not surprising that we are now facing crisis at a great level.

Without a doubt the current situation shows us what is there and things are being brought to the light. They also sadly become the soil to enable what is there to grow to a greater level. So I do not accept that we just sit back and say that it was there all along. Salt was one of the analogies Jesus used for his followers, and the salt of the NT from the Dead Sea had a strong property of preventing growth of what pollutes society. We are meant to limit what manifests as we take responsibility for our setting. The salt likewise, containing as it did phosphates, was also a promoter of good growth, a fertiliser. Our presence is meant to promote the good coming through.

We are not silent… we call for heaven’s help… we recognise the closing of a loop, the end of an era… and we call because we know that salt, as a metaphor, suggests that we do not need to see the full manifestation of unfettered division, hatred, anger and violence.

The next 20+ days leading to the national election will be very challenging indeed. Turning points often come at great expense. One of the key turning points in the original Transition took place with the non-violent response to a brutal assassination. That event was a major draw on us to live where we live, in the shadow of one of the most powerful sculptures remembering that event. We are watchful in this season for obvious reasons.

This has been a personally insulting year with many set-backs in our focus, and it probably indicates that we missed some keys along the way, yet even when we fail there is not a loss that cannot be redeemed.

What can we expect in Spain and into the crises we face? As we increasingly stand in the gap in whatever way we are led in our diverse settings we can expect a new landscape to appear that is more fertile than before. I remain ever so hopeful. None of us are alone… heaven loves to send in help. And we need it ever so much. 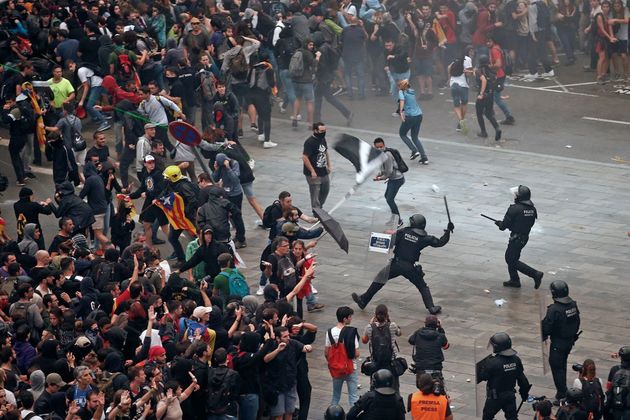 Most of us will have read about the sentencing of the Catalan leaders, and quite a few will have also seen the manifestations and stand-offs between demonstrators and police with a focus at Barcelona airport. I have my not-adequately-informed perspectives, and being neither Catalan nor Spanish am limited as to what I can really say.

Maybe though a few personal perspectives. I have always been right in all my opinions. I am convinced of that because I see what I see, and my sight… Oh no! All that just came out before I could press the delete button. How often we would love to find the delete button before our own inadequacies, weaknesses and arrogance are revealed. Yet not possible.

Things happen and then we are right there in the situation with our history and weaknesses delightfully manifesting. I had a situation this week. Here we are with two guests and it comes to paying the bill at the cafe. The bill comes, clearly totalling up what we have had and I pay exactly what was on the bill. Two minutes later as we stand up to leave, across comes the waiter with the manageress. ‘You owe us another 6.00€. You had two more drinks, and they were 3.00€ each.’ I look at the bill in her hand – 21.00€ and a list of exactly what we have just had, and there she is standing with 21.00€ in her hand that I have just given her! We also know exactly what we have had… A water-tight case and I will need no defence lawyer in this situation. Gayle is beginning to open a sensible dialogue and everything will be within seconds clear. However, there is a better way of doing this. In fact there is a right way of doing this, which has nothing to do with the money of who owes who what, it is about everyone being clear that I am right. So I quickly take over, and absolutely make sure that that my perspective becomes the only one. Stuff the money, I now have a platform for all my gifts. A God-opportunity handed to me on a plate. What God has opened no-one can shut.

On this rare occasion my perspective was the right one (nice for once), but now with reflection, why did I have to do it that way? The manageress did not have a leg to stand on. The best part of the experience was going back a little later to find the manageress to apologise to her for being too aggressive. I have no idea if she needed an apology or not, she graciously insisted she did not, but I needed to do that.

I am convinced change is easy. A little humility goes a long way. If I took time to reflect I would quickly understand the blockage to my six decades of slowness to change. A little bit of humility goes a long way, so I guess my lack of change and my wonderful double portion gift of revealing my immaturities just might be connected to a lack of humility. However, surely not, so I will move on very quickly.

A personal perspective because when it comes to something that really matters how difficult change becomes. Prison sentences, separated from families, histories being recounted that go back generations… it is hardly surprising that there are stand-offs. After all I can have a stand-off about 6.00€.

Dialogue and de-escalating potential conflict is not easy, and in Spain right now it will not be easy. Maybe though I will have a few opportunities to add just a little bit of humility to my prayers for the land. I don’t have to know too much about the rights and wrongs of the current situation; I probably won’t have an opportunity to have any level of influence at a visible level, but there will always be something I can do.

These next 26 days in Spain running up to yet another election will be so key. We certainly cannot sit back and tick off what manifests. There are events that will take place that turn the outcome, but the nature of those events will be key. Who wins the election is not at all important; the outcome is what is important. A greater level of listening, co-operating, laying down personal agendas – the outcome is what is important.

These are huge days for Spain. There was a ‘transition’ over the years 1975-78 in the move from dictatorship to democracy. In a few days time there will be an event that has been described (and I believe prophetically described) as closing the loop of the Transition. A major door in and through the Transition of 75-78 was a tragic political shooting, right in the area where we live – that being one of the main reasons why we wanted to live here. As the loop closes there will be events. If we can shift something the events can take place in the heavenlies. That would be great. We do not need yet more manifestations of what is there. Enough is visible.