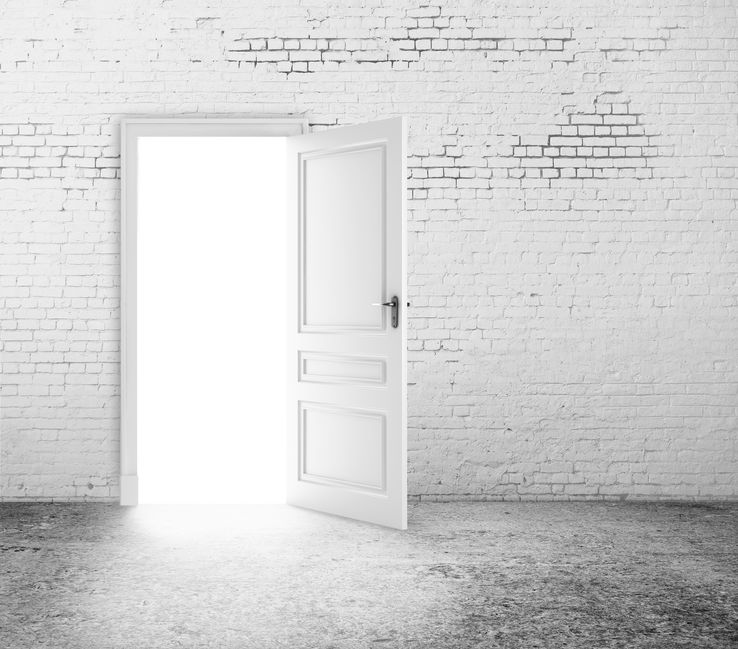 Jesus is unique at every level. He is no mere human teacher, not even simply divine, but the incarnation of God, so in what I write below I am not suggesting that Peter, Paul, et al., are on the same level. I say that as there is a pattern of sequential door opening at the human level that takes place.

Jesus once and for all opened the door for the restoration of all things and only he did that, Revelation 5 states clearly that only he is found worthy to break the seals and open the book of destiny. His work is completed and unrepeatable. We must not though mistake the work of Christ as meaning there is no work for us to do. Scripture makes that clear, as he was sent into the world to compete the work the Father gave him, so he commissioned his followers to go into the whole world to fulfil the work he gave them to do (Matt. 28, the Great Commission). That commission is a renewal of the Creation mandate to Adam and Eve and carries a clear understanding that the purpose is creation-wide resulting in the whole of creation becoming a Temple for God: hence I do not see any place for the rebuilding of a Temple in Jerusalem. (Likewise the rebuilding of the tabernacle of David might be a good analogy to raise up 24 hour worship, but the fulfilment in Acts 15 has to do with the inclusion of the Gentiles into the body of Christ.)

Jesus opens the door for Peter

There are different understanding on what it meant when Jesus gave Peter the keys of the kingdom, and maybe it carries different levels of meaning. His revelation as to who Jesus was is certainly one of the foundations for the future, and the keys given to him were not his exclusively. However, as apostle to the Jews, he plays a key role in opening up the pathway of salvation in Christ to the ancient people. He is the one who stands up on the day of Pentecost to make proclamation

And he testified with many other arguments and exhorted them, saying, ‘Save yourselves from this corrupt generation.’ (Acts 2:40).

Very strong language (‘Save yourselves from this corrupt generation’), the implication being clear for those who reject the message. According to the book of Jubilees we read that when a Jew who refused to circumcise their child they were committing the ‘unforgivable sin’ by declaring that they did not belong to the covenant people:

And now I announce unto thee that the children of Israel will not keep true to this ordinance, and they will not circumcise their sons according to all this law; for in the flesh of their circumcision they will omit this circumcision of their sons, and all of them, sons of Beliar, will leave their sons uncircumcised as they were born.
And there will be great wrath from the Lord against the children of Israel. because they have forsaken His covenant and turned aside from His word, and provoked and blasphemed, inasmuch as they do not observe the ordinance of this law; for they have treated their members like the Gentiles, so that they may be removed and rooted out of the land. And there will no more be pardon or forgiveness unto them [so that there should be forgiveness and pardon] for all the sin of this eternal error (the Psuedopigrapha book of Jubilees 15: 33, 34).

In the same way Peter uses language here that comes close to this. His language echoes the language we find in the Torah, and later in Acts 3:22,23 quoting the promise of a prophet like Moses being raised up and says that those who do not hear the voice of that prophet will be ‘cut off from their people’.

For Moses said, ‘The Lord your God will raise up for you a prophet like me from among your own people; you must listen to everything he tells you. Anyone who does not listen to him will be completely cut off from their people.’

Peter’s message is that Israel can be restored, but the restoration is through Jesus. (It is possible to cling to the Scriptures that speak of Israel being loved because of the patriarchs and a hope that there will be a future turning to God, but this cannot muddy the waters that Peter is proclaiming to Jews that the only way to salvation is through Jesus.)

Peter opens the door for Paul

Peter continues his work among the Jews and in Gal. 2: 7,8 Paul contrasts his calling with that of Peter’s. Peter being commissioned to the Jews while he was commissioned to the Gentiles. One an apostle to the Jew, the other to the Gentiles. Yet it was Peter who was chosen (ambushed?) to bring the Gospel to the Gentiles. The door was then opened, so I suggest there is a sequence: Jesus who died to break the curse of the Law opens the door for Peter to bring the message to the Jews that the time of the fulfilment of the OT prophetic had arrived, so calling them to enter the eschatological people / Israel of God. Peter later reluctantly went to the Gentiles and witnessed that

And God, who knows the human heart, testified to them by giving them the Holy Spirit, just as he did to us; and in cleansing their hearts by faith he has made no distinction between them and us. Now therefore why are you putting God to the test by placing on the neck of the disciples a yoke that neither our ancestors nor we have been able to bear? On the contrary, we believe that we will be saved through the grace of the Lord Jesus, just as they will. (Ats 15:8-11).

That was a strong revelation. There is no distinction, there is no second class level – and this is the apostle to the Jews who is saying this. Indeed the final sentence is more than a little provocative. He does not say they will be saved the same way as we Jews, but we Jews will be saved the same way as they are. There is such a shift in Jesus, the whole world is turned upside down. There might be a backstory to the work of Jesus, but truly he is the starting point, destiny is in him, he is the Chosen one from before the foundation of all things.

The door that was opened to Peter to work in the Jewish context is further opened by him to the Gentiles. Jesus not only took the curse of the Law (hanging on a tree, Gal. 3:13), but died at the hands of the Gentile Imperial powers, judged to be a rebel and a criminal thus opening the door for all who grasp that his death is for them to go free of the powers. His death is for all; restoration is for all; one new eschatological people being built into a Temple fit for his Spirit. I suggest, therefore that in some way Peter is used of God to open the door for Paul. Jesus to Peter; Peter to Paul; Paul to…

Paul opens the door to…

At the very least we have to recover the Pauline Gospel, and maybe there are implications of that Gospel that were hidden to Paul. In the same way as Peter did not clearly see the door that had opened to the Jews meant it was also open to the Gentiles, maybe Paul did not understand where this Gospel would take him. Peter certainly did not understand the full implications of what had been released at Easter and Pentecost, so is it possible that Paul didn’t see all the implications? That is somewhat irrelevant at this time as I am not sure we have even got back to the starting level of what he was up to. While in Brazil I posed the question to Gayle:

Do we have any idea what Paul was up to in his travels, lectures and proclamation across the Empire?

I suggest that whatever ideas we have do not come close to what was in his mind.

A final footnote: if ever we consider that Paul did not see the full implications of what he opened up anything we will understand has to accord with the narrative authority of Scripture. It has to be true to the story line from Creation to New Creation. What a provocation, first to find the starting line and then follow the trajectory.