I had an interesting reflection this week, provoked in preparing for a Zoom call. A few years back… oh yes here comes a story… while getting ready for some travel Gayle was walking and praying about what she should bring to the situation we would be in in a few weeks’ time. While walking she met an angel that she recognised, and recognised as being Gadir. The (female) angel related to our time in Cádiz whose ancient name was for a while, Gadir. She knew that the angel promised to come with us on the flight and together we knew that this angel had a particular gift to bring, the gift of digging! (Angels are fellow servants of the One true God. Partners for the release of the kingdom.)

Gayle carried a strong message with respect to misogyny and patriarchy. Of Latin America Gustavo Gutiérrez said that the women are ‘doubly oppressed and marginalised’. On one of the final evenings we knew it was the time, and that we were in the right context, to give our ‘Amen’ to the release of the angel – I am not suggesting we commission angels as they are sent from heaven, but we can align in agreement (Amen = so be it) so that they can fulfil what they have come to do. We released the digging with explanations that this was not going to stop any time soon. Since that time so much has been uprooted, so much corruption, first always inside the church then beyond. The level, to be honest, has been quite disturbing and taken a considerable amount of our time.

Corruption. Always I think money and sex when I hear that word. But as I talked this week I realised corruption is often so much more subtle. Digging, digging and mining brings up whatever needs to come up, then comes the purifying process. In certain situations this is known as smelting which takes place at a high temperature.

Corruption being exposed. The digging is revealing that the impure mix is that of ‘power’ with the Gospel. [Power corrupts…] When that happens all kinds of compromises are made with the political powers. I have a strong hunch that we will see some major implosions before this year is out, and with / without Gadir’s specific help this will take place in a number of compromised corrupted situations. What an era we are in. As digging takes place, sexual and financial issues will be exposed, but a deeper issue also – that is corrupt, what is mixed that should never have been mixed.

Gayle and I have had a focus on shifts in society for a long time. Gayle was involved in education and taught in schools that were not rated highly in government statistics. In that context she saw people come to faith, and early one morning when having arrived before anyone else was in the school she then thought someone else was also in and playing music… but no, simply some angels had also (got up early?) and come to add some music to the prayer. My push was simple: through prayer the church would shift demonic powers, discover the gift of the city / region and people would come to faith. As I developed that focus I moved from a simple vision of something that might look similar to classic revival (Finney, Welsh, Hebrides etc.) to a presence of God’s Spirit and people throughout all society. Influenced by Anabaptism the challenge was how to see that outwork practically. Thankfully the journey of understanding the nature of the imperial spirit ran parallel to the push toward the emphasis on salt in society. So an understanding that was in contrast to anything top-down developed.

Three years ago, this month, it became clear that a sharp focus for us was to be the opening up of space for a new politics to grow in Spain (and beyond in Europe). This was something left of field as neither of us have a background in politics. And if we were to see some kind of shift here so what? Why this focus? If we did have a top-down perspective this might be easier to understand, but we see the drive to get the Christian PM / President as misplaced. We do not think that all that is needed is to get the right party in power. The party governing can change but unless the very shape changes nothing really changes. 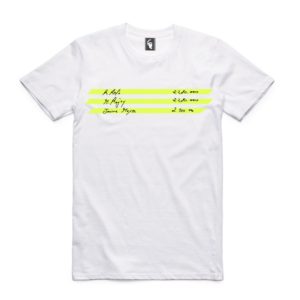 We will soon have lived in Spain 9 years and in this apartment for almost four of those. In the past 9 years we have dug deeply into the history of the land, both recent and ancient. We have witnessed an increasing exposure of corruption, of cases going to court. (Fancy buying a T-shirt with an extract from handwritten notes printed on it? The handwritten notes of the governing party’s illegal accounts and who was paid. This T-shirt has the extract of one of the many names: ‘M Rajoy’, and one of the payments he received from an account that has been run for decades.) There is a long way to go but there are shifts. We sat recently with a senior bank employee who told us in no uncertain terms that we needed to understand that ‘corruption is part of Spain and will always be here’.

The mainline press and TV channels do not cover a lot of the corruption. Thank God for social media and some very honest journalists. This past week a set of conversations have been recorded between a ring of at least 100 national police. (Thankfully there are many good and honest people involved in law and order.) However the conversations have not only been highly negative about the Catalan situation, but have talked one to the other of their hope that certain people will be destroyed and blown up. They have named journalists and the mayoress of Madrid among others.

The Catalonian crisis continues. Are the current Catalan political leaders ‘political prisoners’ or not? Even Amnesty International has said that they are not. At the same time as this goes on, greater clarity is coming into one of the big corruption cases, with the clear implication that many politicians in the governing party, including the PM, have received large illegal payments. The same party has failed to give an explanation for 40billion euros that has disappeared from public funds. The other main historic party has just had a huge debt written off by the banks. (Contrast this to a 42 page letter we received from the government saying that if we did not respond within 10 days we would be fined 70,000euros. Our crime was to send some money to a friend who was threatened by the banks and had no money to buy food.) The Catalan leaders have not been granted bail while a member of the governing party was granted bail and the next day one of his houses (in Mexico) was raided and 5million in cash was discovered. I could go on – almost 900 senior members of the governing party are either now in jail, court, indited or suspects in corruption. Our banking friend was correct – corruption is part of Spain… Corruption continues! But the future?

Anyway I am a little off track with this post. We are committed to seeing the corruption exposed and old ruling families from the Franco era no longer shape the future with that agenda. But so what? Why the focus? In making a response I note that something continues for us both – shifts in society; but the change of focus indcates that there have been some paradigm shifts.

We are deeply grateful to God for both evangelical and charismatic foundations. We pray that those we meet and increasingly share life with will find Jesus in a not-too-dissimilar way. We continue to seek to be a witness, bearing testimony to new creation realities… but our focus is on the politics, to push back space so that those who, knowingly or not, partner with demons will no longer be able to do so, and those who manifest love and justice will find space to yield their gifts for others. That is our focus in the foreseeable future as we believe that is our responsibility.

We have been here almost 9 years, by the end of 12 years we expect to see something shift beyond recognition. The next years… a focus that needs to stay sharp and a bumpy ride!