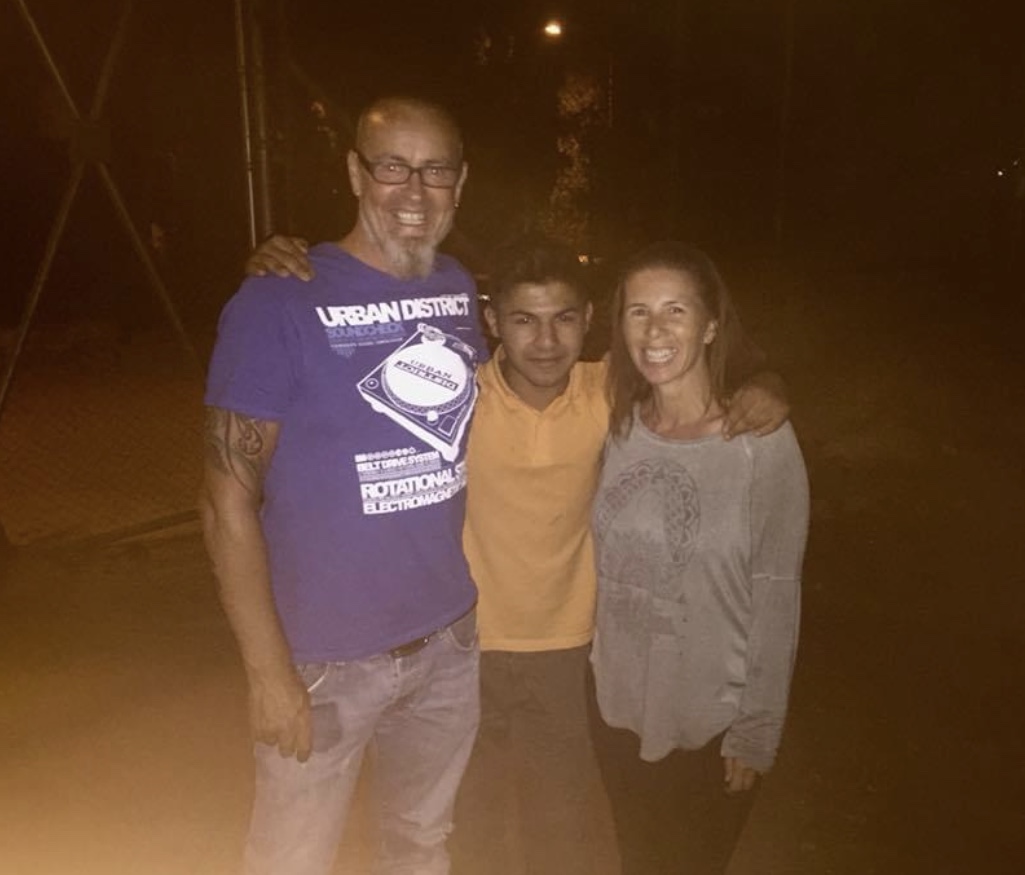 Here is the first post from Gaz Kishere. I have known Gaz n Vic (Gaz is the rather tall gentleman in the photo… and Vic – come on you can work it out!) for some 20 or so years, back when they lived in Bournemouth, and in recent years have heard bits and pieces about what they are up to in Athens. I asked Gaz if he would stick a few posts up here this month. Enjoy!

By way of an introduction my name is Gaz Kishere, dunked a Baptist at 18, Anglicanised because they let me play drums at 22, then a decade exploring the 90’s phenomenon of youth church in club culture and all things church unity.

Somewhere in there we managed to have 4 children and now have 4 grand children.

What I write below are really glimpses of my journey which I hope will provoke interest and folks will push me to draw down my learning. Till now, in terms of speaking back to the body, I am largely silent.

It was 1993, I was told that I had a face like a slapped arse when Roger and Sue Mitchel prayed a Pastoral anointing over me. To me it seemed that during the secret Santa hand out i’d been given a Mrs Miggins Pie Shop embossed tea towel. Nothing of that title spoke of daring adventure or dynamism.

The last three years of my life in organised Christianity was spent as pastor of our ragamuffin crew of co-workers and people we had helped navigate a way from institutionalism to find, for me, we had only travelled a few feet from such ideas.

It was a beautiful human being from YWAM called Jeff Pratt showing up in town which was the final nail in the coffin. He was one of those troubling empathic Jesus types who asks actual questions, ones where everything in you rushes to your mouth to share the truth. ‘Hows things with you guys’? he asked ‘Awful’ I replied , ‘we are burned out and feel total fakers, do we wait to be found out or just confess that we don’t really do people’.

We had considered stepping back for a few months now, doing it all properly, a smiling face handover masking the trauma. Jeff asked how long do you have left in you… my answer ‘Two Weeks !’

It was unfair of me as an extreme introvert who has learned to engage for the sake of others, to suggest I don’t enjoy being around people. I would not discover for another decade that it was simply the wrong context, the fold. We had overstayed beyond our shelf life and my memory of it is that we left with our hair on fire, running.

After 6 years working in community development and counter human trafficking (sex exploited children), my wife and I felt compelled to work in Athens where we have been engaged in the refugee crisis for the last 4 years.

I would like to suggest that this dislodging from the known and the inherited was prophetic and at no point was born out of a desire to leave church, but to pursue it. It was and continues to be a revelation to me what constraints I have had to cast off along the way. I would though have to confess that as one who organised the body to gather in prayer and seek prophetic pathways, I could no longer pray for God to make a space for us, the saints, and for nobody to walk in and occupy it. This was a conflicted time for me trying to live more holistically, move forwards and at the same time not wanting to cause more wounds in the land or to the body.

My first formal meeting in Athens to discuss Child Protection from exploitation would set the scene for most of our time here. I met a young lady in a coffee shop to discuss doing a workshop with unaccompanied Iranian and Afghan minors.

15 minutes into conversation she broke down in tears, talking about burn out and dysfunctions in team and the project.

Have you ever felt made for a moment? I felt like the accumulation of everything I had done, every season I had walked through, my dislodging from inherited thinking and structures was for now.

Since that moment I have been working with grass roots projects, workers, leaders, founders in what I can only refer to as helping them come to fullness.

I invest in them, and I work with them to challenge and uproot ‘life and outcomes limiting structures and organisational cultures’.

I view all of these people, none of them Christian, to be about the work of the Kingdom. All of whom fight for justice, stand between the oppressor and the oppressed, people who break themselves at the feet of the least and the disinherited.

It is in this field, I can finally accept the words ‘shepherd’, and I have.

I have deeply imbedded myself amongst those who have not needed to re enter the land nor come from no such alternative universe as the church. They have only, always dwelled fully in the creation, responding to its groans.

I have undergone an immersion, a re baptism back into culture, back into society alongside Kingdom people. The reality of those I see, and what they do, it screams to me that these were their works, prepared in advance for them to do at their conception. I know there is no kingless kingdom, but I cannot ever say they do not flow from the same king as I.

I stand with ordinary extraordinary people who are getting on with it.

This is the field.

7 thoughts on “Shepherding the Field”