In the past days I have been on a few Zoom calls and some of what I see for the next season has been pulled on. I thought it might be of some value to put it down here, some of which in bits and pieces I have shared before. It needs of course to be weighed and if there is a projection on my part of expectations those will colour what I write. Prayer and revelation is not here to give us what we expect but what we need to enable participate in any forward God movement. Finally any sight has to be supplemented by sight from others.

In the first few days of January it became clear to us that 2020 was not going to be a year that could be planned out. It would be a disrupted year, the important part was that we could not plan as per normal but would have to respond as the disruptions occurred. For many this has been a painful year and I do not write in any way to diminish that experience; we weep with those who weep and rejoice with those who rejoice. I acknowledge the diversity of experiences but also want to give a focus to push against the hope of those who are simply waiting for things to return to normal. God makes everything beautiful in its time and we have to discover what it is that God is beautifying.

It is fairly self-evident that there is a RESET taking place. The concept of a reboot is vital for many sectors, and the use now of the term ‘essential workers’ has been a redemptive and perceptive phrase. I suspect it will soon disappear from the active vocabulary as a measure of recovery comes. Crisis has value if we change… if not!!

There will be a bouncing back… it is OK to go with it to a measure, but the focus has to remain on the reset. However as the bouncing back is heralded (2021?) we should not get carried away. The reset has to go much deeper that a temporary change (everything online) and then back to a thank God here comes the normal!

For those who are seeking to find what God has in this season, as opposed to waiting for this season to end, it is not so much a reboot but a reset. The vision might need to be tweaked but the vision is the vision. A refocus might be required, but it is essentially about resetting. As in many sports there comes a point that the team needs to be reset in order to achieve the desired outcome. Perhaps the format of the team, or new plays need to be introduced. We are now in a period of reset and even when a measure of recovery comes, even if we might be able to go with it to some extent, the important element remains that the reset needs to be completed.

There is a 2 year window to push through this reset, ideally if it can be done in 18 months the better. In 2022 – I do not suspect at the beginning – I see global elements of crises appearing that will bust open the cracks. COVID-19 is serious but is also a sign of what is to come, and is signalling to us now that there is a period of time in which we can get ready for this.

The reset is to check alignments. There are alignments from the past season that will quickly prove to be energy sapping for the next. An important element to avoid in this season is filling all the space. There are also alignments that have become loose that need tightening up. However, we approach it the issue of ALIGNMENTS is key in this reset.

Also get ready to change direction. There will likely be for a number of people the sudden openness of new outlets that they have skirted around the edges of before. They will come with a fresh angle / approach and then open up.

The favour of God is going to be with those who are not giving themselves to protect the structures / institutions but invest in the people. This might well mean embracing what might seem a smaller influence, but invest small and deep and there will both be longer lasting results and also protection into the phase that opens in 2022.

At the same time God is at work not simply with ‘me / us’. We are not at the centre. We can flow with what God is doing, but the future is not being shaped for us as individuals. So I suggest that there are people now who are being loosened up from their former concepts that only got them thus far. The loosening will mean fresh sight to those people and also fresh space for new connections. There are many hubs being shaped at this time… a hidden few here and a hidden few there. 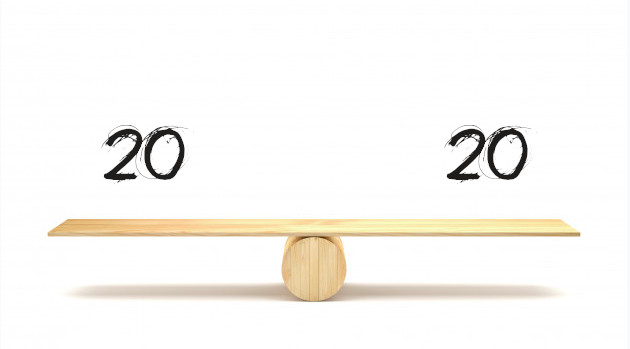 2020… perfect vision… or perhaps to quote a figure from a byegone era:

I kind of think there is a bit of both going on as we cross over into the coming year. Vision to be had, and coming to terms with the mess around us and how to navigate our way through it.

In 2010 (repetition coming up here) I had two dreams, one of the facades opening up, so as we could see inside of the institutions that had shaped public live, but being closed again through an alignment to the familiar, casing things to revert back to the status quo. The second dream was of a see-saw and the numbers 20 falling on the left side, then 10 on the right side. The see-saw was weighted and although there were ‘wobbles’ when it might tip the other way it always came back down solidly on the left side. Eventually as the dates came 20 fell on the left and 20 on the right side. The dream ended with the see-saw balanced.

At the time I took it to mean a complete reversal and ‘whoa just wait till 2020’, … BUT… like all prophetic revelation we are not in a place to interpret it when we immediately receive it. Revelation comes from the future, interpretation is sourced in our expectation that is shaped by our experience (past). As the years have gone on I have continually reflected on both dreams and as we are about to cross over into 2020 it has again naturally become a focus.

The dream ended with a level see-saw… not a reversal.

That aspect is key for me. If I change the analogy a little to a sporting one, a level playing field. But the game still has to be played.

And the mess… yes we are in a mess. There are huge danger signs for those of us with faith in Jesus. ‘Our’ faith has been hijacked in many places to serve an agenda that is nationalistic, xenophobic and misogynist. When faith is pulled in to serve a political agenda we really do end up in trouble – it is the sign that there is a fullness of times (the critical moment of Jesus’ birth was into that context, and the outcome was the centralised decision that Jesus had to be sacrificed so that the ‘place’ was preserved). Religion prevailed and Jesus was expendable.

Of course dependent on one’s standpoint will depend on what mess is seen. Climate? OUCH. Economics? Enough said.

The mess is a challenge to interpret. A mess comes before there are breakthroughs. A right old mess also becomes more visible and more vocal at a time when we thought ‘the beast had received a mortal wound’ but lived again.

Some of what follows is personal as I reflect back on 2019. A year of great shifts. Tomorrow marks a one year mark of purchasing this apartment in Madrid – a goal achieved that we first aimed toward in 2011 and continually pushed toward it with many resistances. The year began with a drawn-out major battle to hold our ground with just under 3 months of continual meetings, documents being produced to establish our status in Spain. The year has brought us to a threshold, and I suspect that the end of this year / the beginning of next is indeed a threshold in many situations and for many of us. (And personally Jan 1, 2020 begins our 12th year in Spain.)

At the threshold point there is sight to be had. There is a fresh view to see what level playing field is there for us. There are closures where some fields can be left; there are also new fields that open up. As the threshold is crossed there is no need to hold on to what was. We have to discover what is now for us to hold on to. Battles are strange – we do not always finish all the battles that we believe were ours.

Threshold also marks that we lose grace over certain previous contexts, but there is great grace for what is new. The new though does not come in the same package, nor provision in the same way as before. (As per losing day to day provision of manna, and having to see beyond the giants to experience season to season opportunities.)

I consider that the early months are months in which clarity will come to what is being seen, as opposed to blasting into the year with sight. As the sight is embraced so contexts, and contacts will come into place. There is urgency, hence the need to move at a measured pace.

The level playing field means ‘game on’. Engagement and strategy will have to be hand in hand. Or maybe I should write engagement and new strategies.

In the process there will be an increase in ‘camps’ being formed. A ‘I am of…’ type of response. There is no issue in knowing where we belong, a question that Gayle and I often ask ‘who is our church?’ is appropriate, but this is not a time to narrow down. There are resources and connections from outside our narrow vision. The parting of company has to be with what is shaped religiously, as the pulling of religion into the power structures is the mire that will withstand progress. Religious was is here. The drawing to others is where life is shared.

Truth-telling is a key to open huge doors. Self-disclosure comes from a defenceless position and this will be increasingly necessary. The visible gap between truth and lies will increase. That gap is masked when religion speaks to expose. Religion does not expose reality but covers it, and when religion is brought in to speak it is to pervert what is true.

We anticipate fresh voices, with strange clothing, appearing in unusual places to mark this coming year.

And – again maybe personal – but with the three-fold focus we had this year on ‘students, women and pensioners’ I see all three gaining a clarity in their voices.